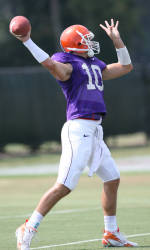 Clemson, SC – Clemson held its first practice in full pads in near 100 degree heat on Wednesday afternoon. The practice was just two hours, the shortest of the preseason, due to exams that closed the second session of summer school at Clemson.

“We were a bit discombobulated because we had a lot of players either late or not here due to exams,” said Head Coach Tommy Bowden. “We stressed tempo throughout and got some things done. It was the fifth straight day of practice in 90 degree heat.

“When you go to a full pads practice leaders come forward because it is tough. We couldn’t simulate this heat in the spring. But, I was satisfied with what we got accomplished. We worked some inside drill and that gave us some full speed looks. We didn’t tackle to the ground except on a few drills. We will see more of that on Saturday.”

The Tigers will have their first day of two-a-day practices on Thursday, working in the morning and the evening. The team will practice once on Friday, then have a stadium scrimmage Saturday morning. The scrimmage will be closed to the public.

Clemson will have its annual Fan Appreciation Day on Sunday from 3:00 Pm to 5:00 PM at Clemson Memorial Stadium.

Bowden continues to be impressed with the play of running back Sadat Chambers and his quarterbacks. “Sadat continues to adapt well to his new position. He has looked good so far. All three quarterbacks looked good today. We will know more about their progress after the scrimmage on Saturday.

Bowden said freshman fullback Chad Diehl of Lyman, SC and Byrnes High School was not with the team due to some family issues. He hoped that he would be back this weekend.

Three players were at the practice, but in yellow jerseys. Jamie Cumbie has a shoulder problem that forced him to miss the practice on Wednesday. He will also have “scope surgery” on Thursday. Wide receiver Jeff Ogren was limited due to an ankle injury.

“We aren’t sure how long Jamie Cumbie will be out,” said Bowden. “He showed some toughness yesterday (Tuesday) because he went the entire 30 periods with an injured shoulder. He didn’t tell anyone about it until after practice. We have moved Kwam Williams from bandit end to defensive end behind Phillip Merling. We will give more reps to Kevin Alexander and Kourtnei Brown at the bandit end position.