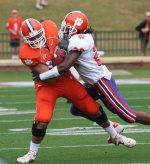 Clemson, SC – Clemson held its final shells practice on Monday, a three hour workout on the practice fields behind the Jervey Athletic Center. The Tigers put on the full pads on Tuesday with an afternoon practice.

Tuesday will be a tough day as players will go through a three hour practice in pads for the first time, then study for final exams that conclude summer school on Wednesday.

“Some of those players you haven’t heard much about. Gabriel had a good day on the defensive line, Capote played well at tackle and Barry Humphries has had a good summer. Pearson got a lot of action today and has really improved.

“You wonder how guys will react to inside running for the first time, but C.J. Spiller popped a couple of runs on the inside that were impressive.

The practice ended with a diving touchdown reception by sophomore wide receiver Tyler Grisham on a pass from starting quarterback Duane Coleman was a defensive highlight of the practice.

Some players, including senior leaders Gaines Adams, Dustin Fry and Anthony Waters, missed two-thirds of the practice due to a class.

Bowden later talked about the performance of his young defensive linemen, a group that will hold one of the keys to Clemson’s progress this year. “Phillip Merling had a really good ay of practice. He was consistent and showed leadership when Gaines was in class. Etta Etta-Tawo also played well today.”

Bowden also talked about the progress of the tight ends.

“Thomas Hunter is the top tight end and he really held that position the second half of last season. He is a tough guy who is consistent and a good blocker. And, he runs well. Akeem Robinson caught a touchdown pass today in one of the drills against the defense and he is way ahead of where he was at this time last year. He had just moved to tight end about this time a year ago. We have use for a lot of tight ends in this offense.”

There were no new injuries reported on Monday. Rendrick Taylor, Cole Chason, Jamarcus Grant and Sergio Gilliam all missed practice. Gilliam, recovering from a knee injury that required arthroscopic surgery, was elevated to a green jervey and should be back by the end of the week.