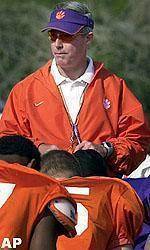 Clemson, SC – Clemson held a two-and-a-half hour practice on Friday, its final practice before its first scrimmage of the year. The Tigers will scrimmage in Death Valley on Saturday, then hold Fan Appreciation Day at the stadium Sunday from 3:00 PM to 5:00 PM.

The Tigers worked in shells on Friday, but will be in full gear on Saturday. “I want to compliment the offensive line for their play so far,” said Bowden. “People tend to forget about them sometimes because they are seniors who have been here for a while. But, they have played consistently and have shown good leadership.”

Bowden looks to Saturday’s scrimmage with anticipation. “I am anxious to see how the two young quarterbacks do running the offense, I am looking forward to seeing C.J. Spiller in live action, and I am looking to see how some of the freshmen play. We would like to make some decisions on their playing status about 10 days out from the first game.”

Bowden said he plans to get a lot of action for the younger players. “This first scrimmage will be a good opportunity to see how the young players have progressed. Gaines Adams and Anthony Waters won’t see a lot of time on Saturday, but it will be a time to see what the young guys like Crezdon Butler, Jeremy Campbell and Rick Sapp can do.”

Clemson announced that freshman wide receiver Kendrick Johnson had gone through the NCAA clearinghouse successfully. Bowden hopes to have him for practice soon. He will have to go through the five-day acclimatization period.

Brandon Pilgrim and Jamarcus Grant were the only two players to miss practice due to injury. Tight end Paul Muse is excused from practice for personal reasons until Monday.