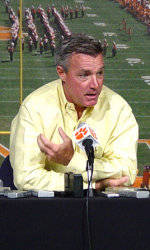 Jacksonville, FL – Media attending the 2006 ACC Football Kickoff in Jacksonville picked Florida State and Miami to win the league’s Atlantic and Coastal Divisions, respectively. Clemson was the preseason pick for second in the Atlantic Division, as the Tigers received 13 first-place votes, third-best overall behind Miami and Florida State.

Miami also edged Florida State as the favorite to win the 2006 ACC Football Championship Game in Jacksonville on December 2.

In other voting at the ACC Football Kickoff, the media overwhelmingly voted for Georgia Tech wide receiver Calvin Johnson as the 2006 Preseason Player of the Year. The junior All-American from Tyrone, Ga., leads all returning ACC receivers with 1,725 yards on 102 career receptions. He received 50 of the possible 65 votes in the preseason balloting.

If Johnson were selected as ACC Player of the Year, he would be the first receiver since NC State’s Torry Holt in 1998 and just the fourth receiver in league history to do so. He could also become just the eighth junior in league history to earn that accolade – the last junior to do so was Florida State quarterback Charlie Ward in 1992. The last Yellow Jacket to be named ACC Player of the Year was quarterback Joe Hamilton in 1999.