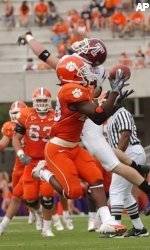 The Tigers nearly had their first shutout since 2000, but Mike McGann’s 4-yard touchdown pass to DeMerio Hamilton with 6:08 left put the Owls (0-8) on the board.

Temple is now 0-3 against the Atlantic Coast Conference in its first season as an independent after being kicked out of the Big East.

Whitehurst’s favorite target was Aaron Kelly, who caught seven passes, including a 34-yard touchdown in the third quarter. He set a Clemson freshman record with 155 yards receiving.

It became apparent right after the opening kick this was going to be no contest. Clemson moved the ball at will, splitting carries between Merriweather and Browning and letting Whitehurst make quick passes his receivers turned into big gains.

The Tigers averaged nearly eight yards a play in the first half, and Whitehurst’s mistakes were the only thing that stopped them. The senior overthrew a receiver and was intercepted, underthrew another teammate who was open for a touchdown and fumbled on a third-down play – though Clemson recovered.

Six of Temple’s first nine runs and nine of its first 12 plays went for no gain or a loss. The Owls had a punt partially blocked.

McGann was 23-for-38 for 298 yards. Bruce Gordon had eight catches for 120 yards and Ferguson caught six passes for 69 yards. He also was the only Owl to have positive yards rushing, running for 48 yards on 17 carries.

Backup quarterback Will Proctor threw the first touchdown pass of his Tiger career, hitting La’Donte Harris for a 16-yard score in the fourth quarter.