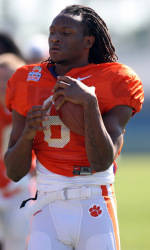 DAVIE, FL – As he was watching SportsCenter the other night from his hotel room, Clemson punter Dawson Zimmerman saw that Clemson was ranked No. 7 on the ESPN broadcast’s most surprising things from the college football season.

“Hopefully that will not be as much of a surprise anymore, considering the way things turned out, and gaining the momentum for next season,” Zimmerman said prior to Sunday’s practice at Nova University as No. 14 Clemson preps for 23rd-ranked West Virginia in Wednesday night’s Discover Orange Bowl.

But to everyone outside of Clemson, the Tigers run to their first ACC Championship in 20 years was a surprise and played a big role in why head coach Dabo Swinney was named the recipient of the 2011 Bobby Dodd Coach of the Year Award.

“It’s an honor to accept it on behalf of our team,” Swinney told the media Sunday. “You show me a Coach of the Year and I will show you a good staff and a bunch of good players. I’m just the name they put on the trophy. It’s these guys and this staff that earned it.

“I’m super excited for him. I think it will be great for Clemson going forward,” Zimmerman said.

Ford is being inducted into the Orange Bowl Hall of Fame this coming week.

Since the close of the regular season, several players have joined Swinney with postseason honors. Tight end Dwayne Allen won the Mackey Award as the nation’s best tight end, while Sammy Watkins was named by several outlets as the National Freshman of the Year. Allen and Watkins were both named First-Team All-Americans by the Associated Press.

The Bobby Dodd Coach of the Year Award is annually presented to the head coach whose team excels on the field, in the classroom and in the community. The award was started in 1976 to honor the values that Dodd exemplified during his career as a head coach at Georgia Tech.

“That was quite an honor,” Swinney said. “Hopefully, I can coach 20 more years or so, and I will probably never receive an honor better than that. The Bobby Dodd Award is a special award because it represents a lot of things.”

Under Swinney’s leadership, the Tigers have four wins over top 25 teams in the same season, a school record for one year, which was also tied for second most in the country. Clemson can gain a fifth with a victory over West Virginia in the Orange Bowl.

Two of Clemson’s top 25 victories have come against Virginia Tech, which was ranked 10th and third nationally. The Tigers beat the Hokies 23-3 in Blacksburg, VA during the regular season and then 38-10 in the ACC Championship game last month.

“Hearing this year that Clemson is going to lose and Clemson is just going to be Clemson in the ACC Championship game, that motivated us,” Zimmerman said.

Clemson also had nine football players graduate last month and have been honored multiple times for their work in the classroom and in the community.

Honorary captain: Clemson named Jeff Davis, who works in the football office as player relations director, as its Honorary Team Captain for the Orange Bowl. Davis was an All-American middle linebacker for the Tigers in the 1982 Orange Bowl against Nebraska. He had 24 tackles, forced a fumble and recovered a fumble in leading Clemson to a 22-15 victory over Nebraska.

Davis was named the game’s Most Valuable Defensive Player that night.

Hopkins update: Wide receiver DeAndre Hopkins says he is at about 85 percent right now after his concussion from Tuesday’s car accident in Clemson. He expects to be ready to go by Wednesday’s game. He says it felt good to be back out and running routes again.

Swinney also expects Hopkins to play in the Orange Bowl.

Heat game: It was a very spirited practice Sunday for two reasons. The first one was because it was the last practice in full pads for the Tigers this season and the second reason was the fact the Clemson team is headed to the Miami Heat vs. Charlotte Bobcats basketball game tonight.