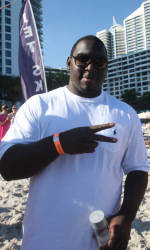 Tigers on the Beach Photo Gallery

Morris Did Not Envision Success This Fast

FORT LAUDERDALE, FL – In five days, Clemson Offensive Coordinator Chad Morris will be coaching in his first Bowl Championship Series Game when the 14th-ranked Tigers play No. 23 West Virginia in the Discover Orange Bowl on Wednesday at Sun Life Stadium in Miami, FL.

Two years ago, Morris was one of the top high school coaches in the state of Texas as he won back-to-back state championships at Lake Travis High School. Things were going great, but after winning 82 percent of his games and three state championships overall, the Edgewood, TX native was ready for a change.

With the help of his wife Paula, Morris decided to give up high school coaching and jumped to the college ranks – Division I-A – as he accepted a job on Todd Graham’s staff at Tulsa University. A year later, Clemson’s Dabo Swinney lured him away from Tulsa and now he has engineered an offense that played a major role in why the Tigers are playing in the Discover Orange Bowl.

During a press conference before practice Saturday, Morris admitted he never imagined being in this situation so fast.

“As a coach, you set goals for yourself as you do for your team,” he said. “My goal was to be a college coach by the time I turned 40 years old or to at least have an opportunity to coach college football. At 41 I had that opportunity. I actually had it before then, but it just was not the right situation or the right place.

“Taking an opportunity to go to Tulsa (that) year, no one envisioned that you’d be sitting in quite the stage that we’re in right now this quick after coming to Clemson just a year ago.”

Swinney did. That’s the reason he brought Morris to Clemson after seeing the results and the numbers he put up in taking a Tulsa team that was 5-7 the year before he got there to a 10-3 record, while setting numerous offensive records along the way.

In his first season at Clemson, the Tigers upped their offensive output by more than 100 yards and eight points per game. Quarterback Tajh Boyd, in his first year as a starter, set Clemson passing records for a season (3,578), touchdowns (31), total yards (3,764) and touchdown responsibilities (36).

“He did a great job growing into this offense, growing into his leadership role,” Morris said. “Some of Tajh’s best friends are defensive players, and that’s kind of uncommon with a quarterback. I mean, that tells you about his leadership.

“I’ve been really pleased with Tajh. He has done a great job, but he is still being pushed. We still have to coach him hard. He’s got so much potential, and we still have a long way to go to get to where we want to be.”

But where the Tigers are offensively, compared to where they were a year ago is night and day. And it’s crazy to think two years ago, Morris was still a high school coach wondering if he truly had what it took to be a major college coach.

Now, the Tigers have signed him to a long-term contract that should keep him at Clemson for years to come.

“It has been great,” Morris said. “I don’t have time to kind of sit back and look and analyze things. We’ll do that probably here in a few weeks. When we get a little bit of time off, we can sit back and think, `Wow, we had a good season or `we had a great season.’ But as a coach your mind always works. What do we have to improve on and what do we have to do to get better and what kind of recruits do we need to go get to get better?

“We have to fix some of the problems that we have. There will be time, and it is great. I’ve been very blessed, but we’ve got work to do. We’re going to enjoy it, but we’re going to go to work and get things done that need to get done.”

Things Work Out for a Reason

FORT LAUDERDALE, FL – Tajh Boyd admitted Saturday he caught a little slack from his Clemson teammates the day after the Discover Orange Bowl announced its Clemson vs. West Virginia matchup for Wednesday at Sun Life Stadium.

“When I was watching the bowl selection show on ESPN, I thought it was kind of ironic that we were playing West Virginia,” the Clemson quarterback said. “It is an intriguing matchup and I am excited to be playing those guys.

“It was funny. I was wearing a WVU hat the day after the game was picked and guys were getting on me. I told them it goes way back, but it was one of those deals. But, it has been a fun week and we are excited to be here.”

Boyd was originally committed to West Virginia early in the recruiting process, but like a lot of young men during that time, he changed his mind and ultimately signed with Clemson, picking the Tigers over Ohio State and Oregon.

But things happen for a reason, and when he de-committed from West Virginia, it opened the door for another quarterback – Gino Smith. All Smith has done is throw for nearly 4,000 yards and 26 touchdowns this season in leading the Mountaineers to a Big East Championship.

Boyd has done well for himself too as he has set single season records at Clemson in passing yards, touchdowns, total yards and touchdown responsibilities as the Tigers won their first ACC Championship in 20 years.

“I think things really fell into place,” Boyd said. “At first I didn’t know how things would turn out, but I have had success at Clemson and (Smith) has had success over there. I think things could not have turned out better in regards to our situations.

“He is a very good quarterback as well and both of us have to perform in this game and I am excited about that.”

Getting healthy: Clemson wide receiver DeAndre Hopkins, who suffered a concussion due to a traffic accident this past Tuesday, practiced in a green jersey Saturday, which means no contact. However, the sophomore, who caught 62 passes for 871 yards and four touchdowns this season, did participate in every drill. Hopkins wore a yellow jersey the previous two days and did not participate in any drills.

Clemson Offensive Coordinator Chad Morris also said Saturday his offense is as healthy as it has been in a long time. He said wide receiver Sammy Watkins (shoulder) and offensive tackle Phillip Price (right knee) are good to go for Wednesday’s game.

Morris also said running back Andre Ellington is as healthy as he was at the start of fall camp.

Physical Practice: Over the last five days, Clemson has really turned up the intensity in practice. Both players and coaches have said head coach Dabo Swinney has brought home the idea that they will get more physical.

“We feel like we’ve got to make sure that we do the things that got us here, protecting the football, being physical, playing physical and being aggressive,” Morris said. “That’s who we are, that’s who I’ve been since 2002, and it’s not going to change.”

Beach Outing: Saturday was not all practice and press conferences, both Clemson and West Virginia were thrown private beach outings at their team hotels in the afternoon. Both teams are staying at beach front resorts.