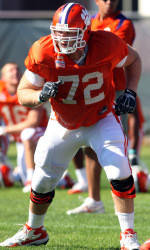 Being at Orange Bowl Means a Lot to Walker

HOLLYWOOD, FL – This time last year Clemson was in Charlotte, NC practicing in 30 degree weather with two inches of snow on the ground as they prepared for the Meineke Car Care Bowl. A year later, the Tigers are in sunny Miami, FL with temperatures hovering around 80 degrees as they prep for the Discover Orange Bowl against No. 23 West Virginia next Wednesday at Sun Life Stadium.

“What a difference a year can make,” Clemson offensive tackle Landon Walker said.

What a difference indeed. Clemson, ranked No. 14 in the latest Associated Press poll, opened the season with eight straight victories and then won its first ACC Championship in 20 years by dismantling Virginia Tech 38-10 in the ACC Championship game earlier this month. With the win, the Tigers advanced to the Discover Orange Bowl for their first appearance in the Bowl Championship Series (BCS) and their first in the Orange Bowl since 1982.

“It’s a totally different experience,” Walker said. “It’s awesome to be here and realize the accomplishments we have achieved at Clemson this year. We are enjoying the benefits of it right now.”

This week has been even more special for Walker, whose father Gary was a part of that 1982 Orange Bowl team that wrapped up the program’s only National Championship with a 22-15 victory over Nebraska.

“It does not have the national championship implications on it that they were playing for back then, but at the same time, it’s a big deal,” Walker said. “A BCS game is a big deal and to be able to represent Clemson and do the same thing my dad got to do 30 years ago is special.

“Honestly, I’m sure there are not a lot of people that could imagine getting to do the same thing as their dad, so it is very honorable to be able to do the same thing he did at Clemson, and be able to go out like that. I’m sure we (the 2011 team) will be talked about around Clemson for a long time, and hopefully we can win the game and go out on a high note like that.”

Through the years, Walker has heard many stories from his father’s Orange Bowl experience, some he could share and some he could not, but the biggest thing that stuck out to him in all of those stories was how focused that team was and how they went down to that game to prove to everyone they were the best team in the country.

“They had such a good team, it was easy for them to be focused on what they were trying to do,” he said. “We have a lot of young guys that have never experienced a bowl game, much less Miami and the Orange Bowl here. For us, it might be a little bit harder to keep guys focused, but as captains you have to lead this week.

“Even though it is the last week of the season, and it’s the last week this team will be together, it is probably the most difficult week. We have to really take advantage of our time together.”

That’s where Walker’s experience at the Orange Bowl differs from his father’s. His father was freshman guard on the offensive line and played the role of a reserve in 1982. Walker is a four-year starter and the Orange Bowl will be his 49th start, which is already a school record. His 3,065 career-snaps are second in school history and he is 32 shy from breaking Kyle Young’s record for snaps in a career.

With all that experience, Walker is looked up to as one of the leaders on the 2011 team, which is why he addressed the team about the importance of this game to him and the rest of the senior class before the team departed from Clemson on Dec. 22.

“It is special to me because of my dad, and winning this game means a lot to me,” he said. “Being in Miami and enjoying Miami is fun and all, but the game is going to be an emotional one for me as I’m sure it will be for the rest of the seniors, and we want to go out with a win.”

DAVIE, FL – Corico Hawkins says he has seen No. 23 West Virginia’s high flying offense before. He sees it every day in practice.

“In some ways it is similar to our offensive tempo and what we like to do with the football,” the Clemson linebacker said Friday from Nova University where the 14th-ranked Tigers are preparing for Wednesday’s Discover Orange Bowl. “There are different formations and sets, but that is mainly the offense we have seen all year.”

Hawkins says the Mountaineers are as good, if not better, than most of the offenses they have seen. The Tigers have had their ups and downs against other strong offensive units.

The Tigers held their own against a Virginia Tech squad that was among the best in the ACC by holding it to a combined 13 points in two meetings this year. Clemson also held its own against Florida State and Auburn earlier in the season. But the Tigers’ defense struggled at times this year, too.

West Virginia enters the Discover Orange Bowl averaging 34.9 points and 459.6 yards per game. The Mountaineers are led by quarterback Gino Smith, who is ninth in the country in total offense with 3,978 yards.

“They are very good on offense and they are fast,” Hawkins said. “Gino Smith is a great quarterback. He does a great job of taking care of the football and getting it to his playmakers.”

Those playmakers are wide receivers Tavon Austin and Stedman Bailey, the first pair of wide receivers in the NCAA to go for over 1,000 yards in the same season.

“They have more than just those two,” Clemson Head Coach Dabo Swinney said. “They have several guys that can beat you. But, obviously, they have those two guys that have over 1,000 yards and they’re a matchup problem with how they play.

“Their quarterback is outstanding. He is incredibly efficient and they run the ball effectively.”

Jordan was a wide receiver on the 1956 Clemson team that played in the 1957 Orange Bowl, while Davis was an All-American linebacker at Clemson on the Tigers’ 1981 National Championship team, which won the 1982 Orange Bowl. Davis was named the Most Valuable Defensive Player in that game.

Former Clemson Head Coach Danny Ford, Davis’ coach at the time, will be inducted into the Orange Bowl Hall of Fame on Tuesday, January 3 at the Orange Bowl Coaches Luncheon.

Common Opponents: Maryland was the only team both the Tigers and West Virginia played this year. Both teams beat the Terrapins in high scoring games at College Park, MD.

West Virginia held off a late Maryland rally for a 37-31 victory on September 17, while Clemson rallied from 18 points back to beat the Terps, 56-45, on October 15. It is tied for the second biggest comeback in Clemson history.

No Need for Preseason Rankings: Clemson is 14th in the current Associated Press Top 25 poll, and is the third highest team in the poll that was not ranked at the start of the season. Kansas State is No. 11 and Michigan is No. 13. Clemson is one of eight schools that were not ranked in the AP Preseason poll.