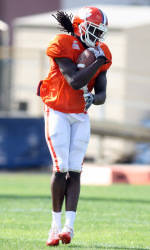 Watkins Excited About Being Home for the Discover Orange Bowl

HOLLYWOOD, FL – When Brad Scott and Jeff Scott recruited Sammy Watkins to Clemson from South Florida last February, one of the selling points was the hope the Tigers All-American wide receiver would have the opportunity to go home and play in the Discover Orange Bowl one day.

Well, as it turned out Swinney was a man of his word. After just one season, Swinney delivered Watkins back to his hometown for the Holidays as No. 14 Clemson will play 23rd-ranked West Virginia in the Discover Orange Bowl on Jan. 4 at Sun Life Stadium in Miami, FL.

It is neat for Watkins because he will play just two hours down the road from where he grew up. Watkins was a top 50 recruit out of South Fort Myers High School, where he earned All-State and All-American honors. Watkins is expecting anywhere from 20 to 30 friends and family to be in the Orange Bowl next Wednesday.

“They are ready to watch me play,” the true freshman said. “They are excited to look on the field and see me instead of looking at a television. Some of them have come to Clemson, but most of them have not.”

It’s also a homecoming for West Virginia defensive back Brodrick Jenkins, who was a teammate of Watkins back at South Fort Myers. The two actually met up last weekend when they came home for the holidays.

“I was telling him what they do and what I’m watching for. It will be fun to play him,” Watkins joked. Joking aside, Clemson owes Jenkins a lot of credit for Watkins’ ability.

“In high school, he is the one that made me better,” the Clemson wide receiver said. “We used to practice hard together one-on-one and stuff like that.”

Don’t look for Jenkins and the West Virginia secondary to have one-on-one matchups with Clemson’s All-American receiver in the Orange Bowl. Watkins set Clemson and ACC freshman records with 77 catches for 1,153 yards and 11 touchdowns.

The Mountaineers run a 3-3-5 look, which means they have five defensive backs on the field the whole game and they play a lot of zone. West Virginia has allowed just one 100-yard receiver this season and no receiver has had more than six catches in a game.

Watkins, in contrast, has had five 100-yard games this year, a Clemson record, and has recorded seven games with six catches or more.

“They play a lot of stuff,” Watkins said. “They also blitz a lot and play a 3-3-5. I’m pretty sure they will drop into a cover-two or cover-four look, but they will not play too much man. I expect a lot of cover two and try to keep me in the boundary and somebody over the top.”

If the Mountaineers can limit Watkins’ big play ability, it means it might be a tough game for his family and friends to watch. However, at least they will be watching him from inside Sun Life Stadium instead of on television.

“All of my family and friends can come,” Watkins said. “I can then actually go home once the game is over and visit with them, instead of going straight back to Clemson.”

HOLLYWOOD, FL – Clemson wide receiver DeAndre Hopkins says it was the scariest moment of his young life when the car he was driving skidded off the road Tuesday morning and hit some small trees.

“It scared me, like it would any normal human being,” Hopkins said Thursday from Clemson’s team hotel in Hollywood, FL. “When you lose control of any kind of vehicle, it’s scary.”

The car, which belonged to his cousin, hydroplaned on a Pickens County, SC road as Hopkins was in rout to join his teammates at Clemson’s WestZone for the trip to Miami, FL. The 14th-ranked Tigers will play No. 23 West Virginia in the Discover Orange Bowl next Wednesday at Miami’s Sun Life Stadium.

“I just hydroplaned, lost control of the car, an accident. It could happen to anybody,” Hopkins said.

The accident left Hopkins with a mild concussion, one which he and Head Coach Dabo Swinney don’t expect to keep him out of the Orange Bowl. Hopkins joined the team in Miami on Wednesday and was at practice Thursday, though he only ran.

The plan is to monitor the situation over the next couple of days and then go from there.

“We are very thankful he was not seriously injured and that he is okay,” Swinney said. “Not many people will walk away from that wreck. But, he ran today and moved around a little bit. I think he will be back practicing by the weekend.”

Hopkins, who caught 62 catches for 871 yards this year, which ranked second on the team behind Sammy Watkins, says he is only experiencing headaches right now as a result of the car accident.

“I’m feeling better each day, so hopefully I’ll be out there soon,” he said. His teammates were just glad to see him at practice.

“It’s just one of those deals where you’ve got to be (worried),” Clemson quarterback Tajh Boyd said. “You never know how damaging it can be. It was definitely a scary moment for the team. He was just blessed to come out of that thing unscathed.

“I think it puts everything in perspective for us as a team, and probably for him the most.”

Hopkins said the accident made him appreciate life, his family and his teammates a little more.

“I just told those guys I was thankful for the teammates I have and how precious life is. Anything could happen like that.”