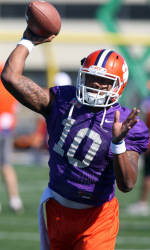 WESTON, FL – Clemson Head Coach Dabo Swinney said he wanted to come to Miami, FL a couple of days early so his team could get focused on the task at hand – winning the 2012 Discover Orange Bowl.

Swinney’s so called “mini-camp” has come together pretty good so far. The Tigers arrived in the Miami area on Dec. 27, two days earlier than originally planned by the Orange Bowl Committee, who planned for both Clemson and West Virginia to arrive on Dec. 29. The 23th-ranked Mountaineers will arrive in Miami on Thursday.

“It made more sense to come on down here than to bring everybody back to Clemson,” Swinney said. “I think it’s going to work out good for us.”

Despite the Tigers early arrival, they were still welcomed in grand style when they got to Miami. Obie (the Orange Bowl Mascot) greeted the team as it got off the plane as did the entire Orange Bowl Committee and its staffers. It was quite the royal treatment. It was what the Orange Bowl likes to call – an Orange Carpet Event.

“It was very exciting,” defensive end Kourtnei Brown said. “The first thing that caught my eye was the orange carpet. That’s when you really know you’ve achieved something in life, when you get to walk on the carpet.

“It felt really good to see the people that were out here. It was very creative with the bus. It’s really neat.”

The Clemson team buses are wrapped in photos of the team from during the season. “It was great; the weather is nice, the wind was blowing a little bit, seeing Obie over here and the Orange Bowl Committee. This is great and we just appreciate everybody being here. I’m just very excited,” quarterback Tajh Boyd said.

The 14th-ranked Tigers, who will take on West Virginia a week from today in the Discover Orange Bowl, practiced for two hours both Tuesday and Wednesday and will do the same on Thursday morning – meaning Clemson will have put in three days of work at the bowl site before the Mountaineers even land Thursday in Miami.

“We’re coming to win, that’s our objective,” Swinney said. “We’ve got a good plan in place and we’ve put a lot of thought into it.”

As for practice, coming down to Miami a few days earlier has allowed the players to get back in their normal routine, especially considering they were coming off the Holiday break, which started on Dec. 22.

“We’ve got to keep everybody focused on this game,” Boyd said. “It’s going to be a fun trip and we’re excited about it, but again it is a business trip for us.” Clemson (10-3) will have some fun, though, as a reward for winning the ACC Championship and qualifying for the Orange Bowl. Besides having their own down time in which they will be able to take advantage of staying at a beach front resort, the Tigers will also get to participate in other bowl sanctioned events which are geared to entertain the players in between practices and lifting.

“I’m definitely looking forward to it and I’m excited about being down here and playing this game,” Boyd said.

Other Notes: Clemson wide receiver DeAndre Hopkins, who suffered a mild concussion from a traffic accident Tuesday in Clemson, which caused him to miss the charter plane to Fort Lauderdale, made it to the Miami area Wednesday and will be with the team at Thursday’s practice. The status of his health, and if he will be able to practice, will be evaluated at that time.