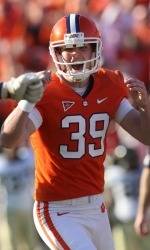 CLEMSON, SC – Clemson Head Coach Dabo Swinney will welcome 48 returning lettermen, including 15 returning starters from the 2011 ACC Championship team to the first of 15 spring practice sessions on Wednesday. The Tigers are slated to begin practice a little after 4 PM on the practice fields behind the Jervey Athletic Center. Practices are closed to the public.

Clemson will close spring practice with the annual Orange-White game at Clemson Memorial Stadium on Saturday, April 14 at 4 PM.

The Tigers are coming off a 10-4 season that saw the program win its first ACC Championship in 20 years. The season included a school record four wins over top 25 teams, including a pair of wins over top 10 Virginia Tech teams, including the 38-10 win over a third ranked Virginia Tech team in the ACC Championship game. That tied for the highest ranked team Clemson has defeated in its history.

“I am very excited for the start of spring practice,” said Swinney, who has coached Clemson to the Atlantic Division ACC title in two of his three full seasons as head coach. “We are looking forward to a great spring because only 14 of our players for this fall won’t be here this spring. We have 12 new freshmen coming in the summer and two injured players, Last year we had 27 new players join us in August.”

Swinney said the offensive and defensive lines will be areas of emphasis this spring. “We have talented players, but we don’t have a lot of experience in the offensive and defensive lines. We are going to have a competitive spring with a lot of work against each other. We want to feel good about a two deep across the lines when we finish spring practice.”

Swinney said that only two players would be out with injury for spring practice, starting safety Rashard Hall and reserve linebacker Tony Steward. Both had knee injuries last year. Steward had applied for a medical red-shirt year after he played five games last season, but the request was denied by the NCAA.

Swinney announced that Colton Walls, a linebacker from Charlotte, NC who red-shirted last year, would not return to the program. Three-year letterman Matt Sanders also will not return and will graduate from Clemson in May.