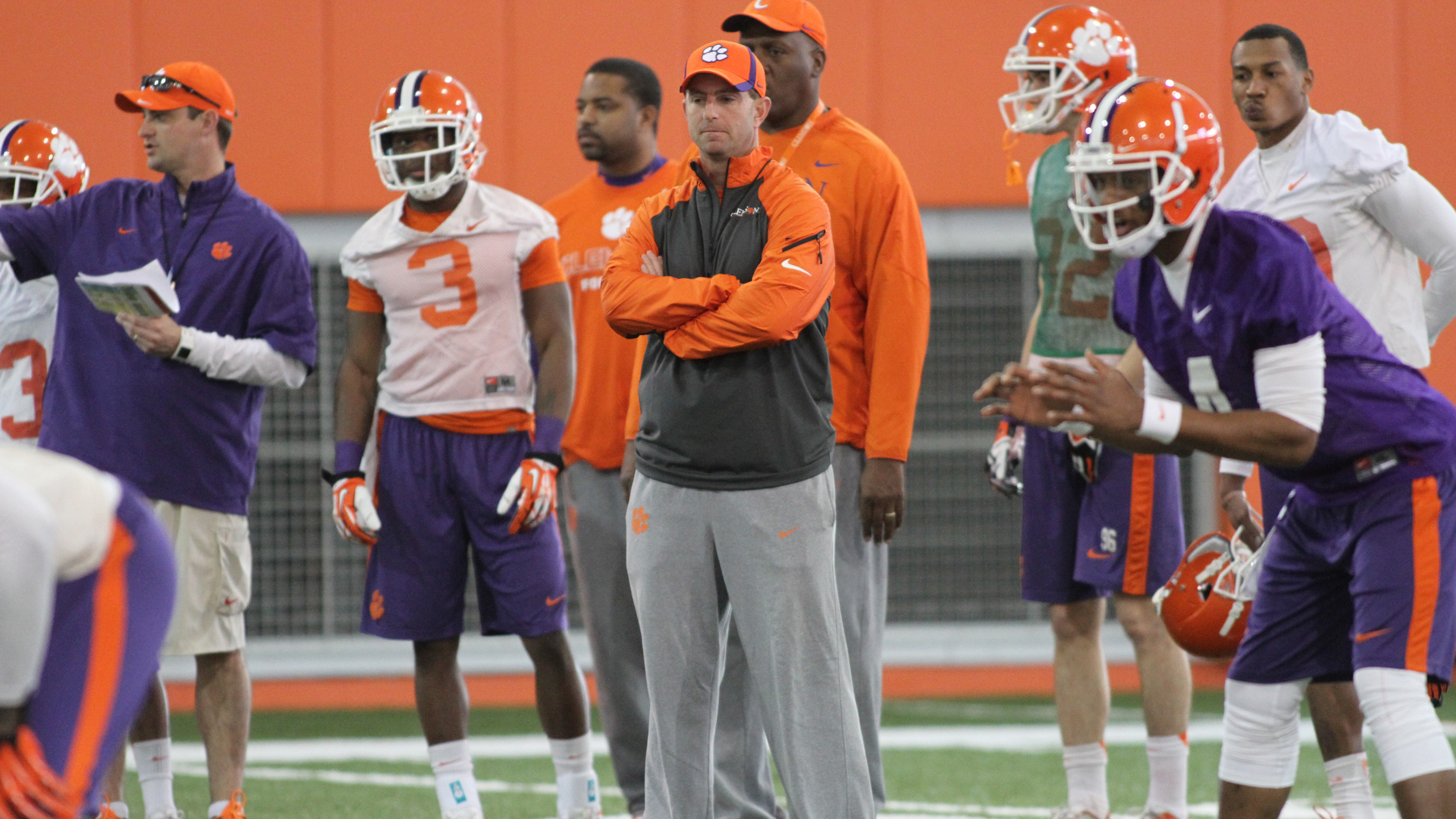 CLEMSON, SC – Clemson held its first of 15 spring practices on Wednesday on the practice fields behind the Tigers’ Indoor Facility. There were some old faces and new ones at practice as Dabo Swinney prepares for his sixth full season as Clemson Head Coach.

Tajh Boyd, Roderick McDowell, Rodney Williams and C.J. Spiller were among the prominent names in Clemson football history in attendance, but they are no longer active players. The 2014 Tigers must replace Boyd, a 3800-yard passer, McDowell, a 1000-yard rusher, and Sammy Watkins, a 1400-yard receiver.

There are three quarterbacks battling for Boyd’s important quarterback position, none of whom have started a college game. Senior Cole Stoudt, sophomore Chad Kelly and freshman Deshaun Watson all got a lot of work in the two-hour and 15-minute workout in perfect football weather.

“We had good energy out there today,” said Swinney. “We have the makings of a good team, but we are a long way from that right now. It’s just the first day and you have to start somewhere. Now we have something to take back to the film room and something to evaluate. It was a good start for a lot of these guys.”

Swinney talked about the competition at quarterback, which could go on for a while. There are 15 spring practices and 29 fall practices before the August 30 opener at Georgia.

“It is exciting to turn the page and get on with this quarterback competition that we have in front of us. They could separate themselves and if they don’t then we will let them compete. It could go all the way in to the start of the season, but that is all to be determined. You can’t win the job in one practice and you can’t lose the job in one practice. We have a long way to go.”

The day started with the team gathering at the Tombstone Graveyard outside the practice fields. After a short speech by Swinney about last season and the win over Ohio State in the Discover Orange Bowl, 2013 seniors Boyd, McDowell, Quandon Christian, Chandler Catanzaro and Phillip Fajgenbaum unveiled the new tombstone to commemorate the win over the seventh-ranked Buckeyes. (Click HERE to watch the unveiling of the tombstone.)

A win over a top 10 team in a bowl game is honored with a tombstone at the area. It is the second straight year Clemson has done it, as the Tigers ended the 2012 season with a win over seventh-ranked LSU.

Six true freshmen who entered Clemson in January made their debut in a Clemson uniform for a practice. The list includes Watson, a record setting quarterback from Gainesville, GA. Watson was wearing number-four during practice, a number that has been retired in honor of former Clemson All-American Steve Fuller.

Swinney said after practice that Watson, with Fuller’s permission, will wear number-four this season. His jersey will also include a logo with “Steve Fuller #4” on it. “I talked with Steve about this last May when we played golf together at the Chick-fil-A Tournament.

“He was on board with it. The logo will bring attention to Steve’s great career. We are talking about someone who was a first-team Academic All-American and a third-team AP All-American on the field. What a standard he set.”