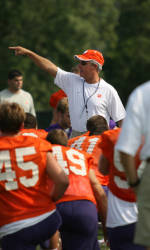 Clemson, SC – Clemson opened its preseason football practice with a three-hour workout in shorts on the practice fields behind the Jervey Athletic Center on Saturday. The Tigers will practice in shorts on Saturday and Sunday, in shells on Monday and Tuesday before practicing in full pads for the first time on Wednesday.

Head Coach Tommy Bowden welcomed 105 players, including 50 returning lettermen and 11 starters to the first practice. The list included 21 scholarship players in their first year with the program. “The guys did well today,” said Coach Bowden. “It was a good first day. It was a long three-hour practice, but the team was ready. We cut back a little on conditioning at the end. We don’t play tomorrow, they will be in shape by game day. It is going to be a long hot week of practice.” Clemson is not scheduled to have a day off from practice until Sunday, August 12 when the team holds Fan Appreciation Day.

Bowden said he was excited to be back at practice. “The first day of practice is always exciting for everyone, the players, the coaches, everyone. That excitement will wear off some tomorrow.”

Five of the 21 newcomers, Willy Korn, Brian Linthicum, DeAndre McDaniel, Landon Walker and Xavier Dye, all enrolled in Clemson in January and had gone through spring practice. But, for the other 16 players it was their first day of full practice. Still, Bowden feels his newcomers are ready because all 16 enrolled in Clemson for the second session of summer school in July.

“I really like the rule that allows freshmen to enroll in July,” said Bowden. “They have been here five weeks and it really helps them get acclimated academically and athletically. They have been working out on their own and taking courses, so they are getting used to college life. It used to be that they were hit with practice, books and classes all at once. This is a much better situation.”

Bowden said his team feels the sense of urgency with the start of practice because the Tigers begin the season with ACC rival Florida State on Labor Day night, a game that will be nationally televised by ESPN. But, at this point, there isn’t any change in the practice format.

“At this stage you are installing everything and going over basics, no matter who you play in the first game. We have the same basic approach that we had this time last year when we opened with Florida Atlantic. The schedule and approach won’t change much until 10 days prior to the first game.”

Antonio Clay missed the second semester of the last academic year as he dealt with the death of his sister in an automobile accident. He was back at practice as a second team middle linebacker on Saturday. “Antonio did well for his first day back,” said Bowden. “He is a few pounds over weight, but he will be at his playing weight soon.”

Bowden said on Friday that the kicking game would be an area that would receive a lot of work in the preseason. That was apparent during practice on Saturday. “We need to improve in our special teams area, in particular kickoff coverage. We also will have a new punter and a new place kicker so that will be an area we watch closely throughout the preseason. I thought Mark Buchholtz did well for his first day as a placekicker and Richard Jackson did well punting the ball today.”

The only player who missed the first practice on Saturday due to injury was first-year freshman Drew Taylor. Taylor suffered a broken ankle at home in Birmingham, AL before coming to Clemson. He was the only Clemson player in a yellow jersey on Saturday.

Among the coaching personnel on Saturday were student assistant coaches Damonte McKenzie. Dukes was a starter the last three years for the Tigers, including all 13 games in 2006 when he helped the Clemson offense score a school record 425 points, best in the ACC. Dukes was released by the Miami Dolphins recently and has returned to Clemson to finish his degree. McKenzie lettered for the Tigers from 1995-99 and is also back on campus this fall to finish up his degree requirements.