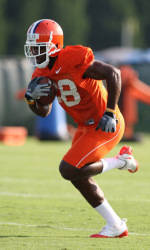 Swinney has 50 returning lettermen and 15 returning starters from last year’s team that finished with a 7-6 record and an appearance in the Konica Minolta Gator Bowl.

Tuesday was the first of 29 preseason practices for the Tigers, who open at home against Middle Tennessee on September 5 at Clemson Memorial Stadium. Clemson will practice once in the late afternoon or evening this week, then will have two practices next Monday.

“It was a good practice, there was good energy out there today,” said Swinney. “The most impressive aspect of practice was the retention. The retention from the spring was good on both sides of the ball, very good on the defensive side.

“We still have a lot of work to do and there were some things I was not pleased with. We have to learn how to practice in shorts these first five days. But there was a lot of excitement out there.”

Swinney alternated quarterbacks Willy Korn and Kyle Parker throughout the practice with the first team and they continue to be listed co-starters at that position. Freshman Tajh Boyd and returning letterman Michael Wade also worked at that position.

“We want to create as much competition as we can throughout these practices. The better the competition in the preseason the better the performance on game day. Both good quarterbacks know they are at a position that is in the spotlight and they know there is a sense of urgency.”

Overall it was a good first day for Swinney and his Tigers. “I have been anxious for this day. You reach a point during the summer when you look at film and go over everything you can without going to the practice field. Today it finally arrived and it was great to get started.”

Freshman offensive tackle J.K. Jay was the only player in a yellow jersey at Tuesday’s practice. He sat out with a back injury, but did do some running on the side. He suffered the injury in mid-July while lifting weights.