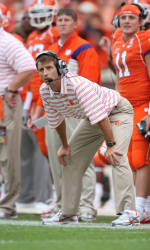 Preseason practices are closed to the public, but the team will hold its annual Fan Appreciation Day on Sunday, August 23 from 3:00 Pm to 5:00 PM at the concourse at Clemson Memorial Stadium.

Swinney will welcome back 50 lettermen and 15 starters from last year’s team that finished with a 7-6 record and an appearance in the Konica Minolta Gator Bowl in Jacksonville. The Tigers have 25 returning lettermen on offense and 24 on defense, plus a special teams letterman.

“We are all looking forward to getting started,” said Swinney on Monday. “It is great to have a clean start. Last October 13 through the end of the season was very hectic. We start fresh with a new West Endzone facility, new training room, new weight room, new offices and meeting facilities.”

Leading the returnees for Swinney is running back Thomas Austin leads the offensive line a year after he received second-team All-ACC honors.

The defense returns eight starters from a unit that ranked in the top 25 in the nation last year in total defense, scoring defense and pass defense. Kavell Conner is the top returning tackler from that unit after he accumulated a team best 125 stops last year. The secondary is led by the cornerback combination of Chris Chancellor and Crezdon Butler, who have a combined 18 career interceptions, more than any other cornerback combination in the ACC entering the 2009 season.

DaQuan Bowers is the top returning tackler among defensive linemen with 47 tackles and he was Clemson’s MVP against Nebraska in the Konica Minolta Gator Bowl. The Tigers also welcome back defensive end Ricky Sapp, who had his 2008 season cut short by a torn ACL at Virginia last season.

Swinney is expected to have 105 players at practice on Tuesday. One of the players participating will be freshman quarterback Taj Boyd, who was medically cleared to participate in practice. Boyd had surgery to repair a torn ACL in February. He suffered the injury during his senior year of high school.

The only player who will miss the first day of practice due to injury is freshman offensive tackle J.K. Jay, who has a back injury that was suffered in July while lifting weights. Jay hopes to start practice later this week.

Three players have left the active roster since July 1. Jamaal Medlin and Stanley Hunter left the team for medical reasons and will remain in school, while offensive lineman Barry Humphries announced will transfer to another school.