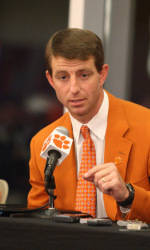 *The Tigers got back on the practice fields on Saturday and the weather was much nicer than the week of practice at Clemson. It was so cold on December 22, the date of Clemson’s last practice, that the Tigers practiced in the indoor track facility. But today it was 78 and boarded on being humid.

Coach Swinney said after practice that he hoped it would be warm this week for a couple of reasons. It makes it a lot easier to get loose for practice and puts the team in a positive frame of mind after battling difficult conditions the week before Christmas. It also could be a bit of an advantage for the Tigers against a Nebraska team that has been playing in cold weather for a couple of months. Will it effect those big Nebraska linemen? Time will tell. It might not be a factor on game day either because the high on Thursday is suppose to be 62 degrees.

The Tigers worked from 10:15 AM to 12:15 Pm, at Jacksonville University football practice fields, then the “‘varsity” went through a six and a half minute conditioning run. They all must have gone light on the turkey, or done some running on Christmas eve and Christmas day because they all made the run with relative ease.

Once again the Tigers “JV” worked for four more five minute practices after the regular practice. I have seen other Clemson coaches scrimmage the young players during bowl practice, but it has not been as organized and as steady as what Coach Swinney has done in preparation for this bowl. The players getting the extra practice are not just red-shirts either. Jamie Harper has gone through these extra drills and that will pay off next year for sure. Kyle Parker continues to throw the ball well in these drills and I have been impressed with the play of a lot of the young defensive backs and receivers.

*After practice I listened in as Coach Swinney addressed the team on a number of issues. His post practice talk included a history lesson on Nebraska football history. Did you know the Cornhuskers have won more football games than any other Division I program since 1970? Their list of accomplishments during that time includes five National Championships. This is their 38th bowl game in the last 40 years.

*Coach Swinney also challenged his defense, calling out individual players from the secondary to have their best preparation for a game all year because the Nebraska offense might be the most efficient and balanced the Tigers have faced all year. Quarterback Joe Ganz might be the best quarterback Clemson has faced all year. He is the top quarterback Clemson has faced in terms of passing efficiency.

*Landon Walker missed practice on Saturday. He was still at home in North Carolina on Friday when the rest of the team reported due to a bad case of stomach flu. His dad Gary Walker, was expected to drive him to Jacksonville some time on Saturday. Of course his dad was on the sidelines for the Tigers the last time Clemson played Nebraska, as he was a member of Clemson’s 1981 National Championship team. He is one of three 1981 Tigers who could be in Jacksonville for this game. Mike Wade’s son by the same name is the holder for the 2008 Tigers and Ronald Watson’s son, by the same name, is a walk-on running back for the Tigers this year.

Other Notes: I was informed by the East-West Shrine game that Aaron Kelly will be participating in that contest, which will be played in Houston, TX on January 17. James Davis, Michael Hamlin and Cullen Harper are all schedule to play in the Senior Bowl on January 24. Other Clemson seniors, including Dorell Scott and Chris Clemons, are going to receive invitations to the Texas vs. The Nation All-Star Game.