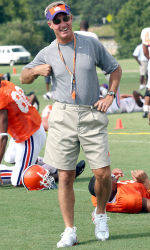 Clemson opened its preparation for the 2005 Champs Sports Bowl with a two-hour practice on Saturday. Tommy Bowden’s Tigers will meet Colorado in the December 27 game in Orlando, FL at the Florida Citrus Bowl Stadium.

The Tigers worked from 10:00 AM to noon on the practice fields behind the Jervey Athletic Center. All players were present and went through the full practice with the exception of quarterback Charlie Whitehurst. But, even Whitehurst, who had minor surgery on a shoulder on December 1, went through many drills and threw the ball with shoulder pads for the first time since his surgery.

“This was a very good practice,” said Bowden, who missed the opening calisthenics and a few drills as he was driving back from Greenville, SC where he attended an FCA breakfast with his father. “The time off since the last game has refreshed the team. It was cold crisp day so there was some energy. It was a good spirited practice and that was good to see. They made the conditioning run at the end of practice, which was a good sign.”

Whitehurst looked strong considering he had surgery just nine days ago. “I thought Charlie looked good,” said Bowden. “He went through some drills and did well. He threw the ball well. We expect him to be the starting quarterback against Colorado as long as he gets the practice time that is needed.” Whitehurst is expected to be ready for full practice by next Thursday. The Tigers will practice on Sunday, then take off for exams, returning for a short practice on Thursday morning.

Bowden was asked after practice to comment on the coaching change at Colorado. Gary Barnett has been replaced by defensive coordinator Mike Hankwitz. “It doesn’t make it any easier for us,” said Bowden. “I don’t know what happened to coach Barnett, I am not aware of the situation enough to comment. I do know he was very successful, winning the North Division of the Big 12 four times in the last five years.

“But, we will face a team that is rejuvenated, wanting to impress their new coach. That happens quite a bit when a new coach is hired for a bowl game.

“Just look at Clemson’s bowl history. Twice when Clemson has changed coaches prior to a bowl (1978 and 1993), Clemson has won the bowl game. The one time the opposition changes coaches (1985 Minnesota for the Independence Bowl) for a bowl game against Clemson, the opposition won.”