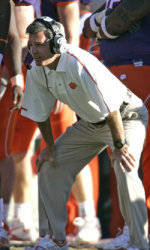 The Clemson football program is one of 29 institutions recognized for at least a 70 percent graduation rate by the American Football Coaches Association. The AFCA announced its Academic Achievement Award recipients on Tuesday.

Nine ACC schools were among the 29 lauded by the AFCA on Tuesday, five more than any other conference. The Big East and Big 12 were second with four schools apiece.

This is the third time Clemson has been recognized with at least honorable mention honors by the AFCA for its graduation rate. All three years have taken place since Tommy Bowden became the head coach in 1999.

This past December, Clemson ranked second in the nation among Top 25 schools in the USA Today final regular season poll according to the NCAA’s graduation success rate. Clemson had a 94 percent graduation rate for the four-year period taken into account in that study, second only to Notre Dame among top 25 schools.