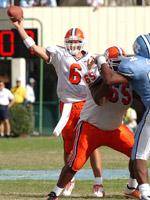 Two teams coming off heart-breaking two-point losses will battle in Death Valley on Saturday afternoon. Clemson lost at NC State 17-15 on October 18, while North Carolina dropped a 33-31 decision to Arizona State in Kenan Stadium last Saturday. Clemson was down two and had the ball at its own 47 with 4:49 left, but could not get a drive going to a winning field goal. Field goal kicker Aaron Hunt was 3-3 on field goals in the game. North Carolina had a more bitter ending as Arizona State scored on a three-yard touchdown pass with no time left on the clock, to gain the two-point victory in Chapel Hill.

The road team has had success in recent years in this series. In fact, the road team has won each of the last three games. The last two games have been large victory margins for the road team. North Carolina won at Clemson in 2001 by a 38-3 score on Clemson’s Homecoming, one of just three Clemson losses on that special day since 1971.