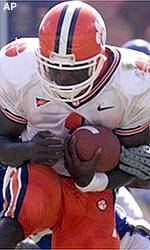 Game: Clemson (5-0, 2-0, 5th AP, USA) vs. NC State (4-0, 1-0) Date: October 7, 2000 Kickoff: 3:36 PM Special Day: Team Reunion Day (Tiger teams from 1970, 1980 and 1990 will be recognized) This will also be the 20th Textile Bowl Expected Attendance: 80,000 Ticket Availability: Still Available ($25 apiece) High School Gate ($6 for students high school age and under at Gate 11, starting at 1:30 PM) Quote from Van Hilderbrand, Clemson Ticket Manager. “We are expecting over 80,000 fans for the NC State game. I ask all fans to arrive in the Clemson area early on Saturday because it will be the largest volume of traffic we have had this year.” Hilderbrand also said that the Maryland game is sold out, but there are still tickets remaining for the Georgia Tech game on October 28.

Series Note: NC State has won each of the last two games by a combined 11 points. Clemson has scored 70 points against the Pack the last two years, yet lost both games. The last time Clemson started out 5-0 or better was in 1987. NC State ended that streak with a 30-28 win in Death Valley. NC State is trying to become 5-0 for the first time since 1991. Clemson ended the Pack’s winning streak that year with a 29-19 win at Clemson.

Bowl Attendance: The Sugar Bowl is scheduled to send two representatives to the Clemson vs. NC State game.

Other Notes: This is the latest in a season that two undefeated teams have ever met in Death Valley. Never before have two undefeated teams with at least four wins met at Clemson Memorial Stadium. …Keith Adams needs one tackle for loss to break Anthony Simmons school record for consecutive games with at least one tackle for loss. Adams and Simmons both have streaks of 17 straight games….Travis Zachery needs three touchdowns to tie Lester Brown’s career touchdown record. Zachery has 29 and Brown had 32 between 1976-79…Clemson’s #5 national ranking is its highest since September of 1988 when Clemson was third heading into the Florida State game…Clemson quarterback Woodrow Dantzler needs just 21 yards rushing to break Steve Fuller’s season record for yards rushing by a quarterback. Fuller had 649 in 1978 and Dantzler already has 629….Dantzler has 520 yards rushing in his last three games. The Clemson record for rushing yards in four consecutive games is 599 by Raymond Priester in 1995.