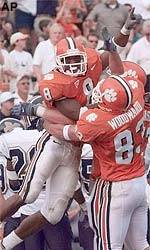 From the Associated Press

CLEMSON, S.C. – Clemson has breezed through its schedule thus far, but N.C. State may prove to be more of a challenge in a matchup of undefeated ACC teams Saturday.

Coming off a 52-22 trouncing of Duke on Saturday, the fifth-ranked Tigers (5-0, 3-0) are off to their best start since 1987 and have bombarded opponents all season with a dangerous offense and a stifling defense.

The closest game Clemson has had this season was a 31-10 victory at Virginia on Sept. 23. The Tigers have outscored their opponents 238-48, winning by an average of 38 points.

But the Wolfpack (4-0, 1-0) have shown amazing late-game toughness for a young team and are one of three undefeated teams left in the ACC. They posted their second overtime victory of the season Sept. 21, downing Georgia Tech 30-23.

Robinson has topped 100 yards in nine of his last 10 games, and Rivers has thrown for 13 TDs in his first four college games.

The Wolfpack have outscored opponents by a combined 72-24 in the fourth quarter and overtime periods en route to a perfect start under first-year coach Chuck Amato.

“These kids did not flinch,” Amato said.

N.C. State, though, is contending with a Clemson team that has excelled on both sides of the ball.

Wolfpack senior linebacker Clayton White broke his right arm against the Yellow Jackets. He is expected to miss at least six weeks.

The Tigers lead the nation in total defense, allowing just 199.2 yards per game, and are tied for sixth in the country in scoring defense at 9.6 points per contest.

Led by quarterback Woodrow Dantzler, Clemson ranks fourth in the nation in scoring with an average of 47.6 points per game.

Dantzler, who ran for three touchdowns and threw for another score against Duke, has rushed and thrown for a total of 16 TDs. He has gone over 300 yards of total offense in a school-record three straight games.

Clemson leads the all-time series 42-25-1, but North Carolina State has won the last two games between the schools.