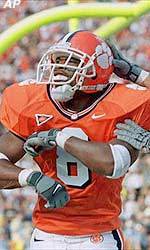 CLEMSON, S.C. — Clemson coach Tommy Bowden thought his team was on its way to Florida State undefeated after Rod Garnder’s diving catch put the Tigers ahead 28-24 with 1:52 left.

George Godsey set a Georgia Tech record with 454 yards passing. He went 35-for-57 and had three touchdowns as Clemson gave up its most yardage ever through the air.

“Godsey came up with some big plays on third down when we had to have them,” O’Leary said.

After the game, Bowden said his team’s inexperience led to the Yellow Jackets’ 550-yard day.

“I’m kind of disappointed. I did not think they would be that productive,” Bowden said.

Clemson (8-1, 6-1) likely fell out of the national championship picture, but can still win a share of the conference title if the Tigers beat Florida State next week.

Clemson star Woody Dantzler left the game at halftime after reinjuring his left ankle. He passed for 76 yards and ran for 18 more.

“Credit Georgia Tech – their defense was very good. This hurts now, but we will come back,” Dantzler said.

His replacement, Willie Simmons, passed for 131 yards and rushed for 25 yards.

“There were a lot of momentum swings, which to me tells a lot about a team’s ability to bounce back and retake control. That hasn’t happened a lot this year wt tis team,” Bowden said.

Clemson’s special teams kept the Tigers, who had a season-low 354 yards total offense, in the game.

A blocked punt recovered at the 1 led to Dantzler’s touchdown in the first quarter. In the third quarter, Brian Mance’s 88-yard punt return put Clemson ahead 21-16.

“When you block a punt and return one for a touchdown, you should win the game,” Bowden said.

Joe Burns added 98 yards on the ground for Georgia Tech.

Clemson had a chance to take an eight-point lead early in the fourth quarter, but Aaron Hunt’s 29-yard field-goal attempt hit the left upright.

The teams traded the lead three times in the last 6:35 after Godsey’s 48-yard pass to Campbell and a 2-point conversion gave Georgia Tech a 24-21 lead.

In the first quarter, Dantzler had a 1-yard touchdown run after the blocked punt. His 29-yard touchdown pass to Travis Zachery made it 14-3. Zachery led the Tigers in rushing with 101 yards.

Georgia Tech responded with a 33-yard touchdown pass from Godsey to Watkins to make it 14-10.

Clemson has lost four in a row to Georgia Tech, each by three points.