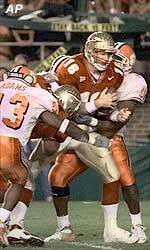 TALLAHASSEE, Fla. — Bobby Bowden gave his son the same treatment he affords all the other wannabes who think they can beat Florida State.

First he wore him down. Then he rubbed it in.

Chris Weinke threw for 521 yards Saturday night, and Bowden kept his starters on the field well into the fourth quarter, as No. 4 Florida State beat No. 10 Clemson 54-7 in Bowden Bowl II.

The second coaching matchup between Bowden and his kid, Tommy, included all the expected sideshows: Father and son meeting at midfield before kickoff, surrounded by dozens of cameramen, Bobby’s wife, Ann, watching from a luxury box, wearing a shirt with garnet and gold on one side, Clemson’s burnt orange on the other.

But this game was nothing like the 17-14 victory Florida State had to fight for last year in Death Valley, where Bobby Bowden earned his 300th career victory.

“I didn’t predict this,” Ann Bowden said. “But Bobby felt like if we played as good as we could, it could end up like this.”

The Seminoles (9-1, 7-0) improved to 37-0 in home Atlantic Coast Conference games and clinched the ACC title for the ninth straight time.

It’s a conference Clemson (8-2, 6-2) owned about a decade ago, although games like this make it seem like longer. The Seminoles finished with 771 yards, the most ever allowed by Clemson, and drilled home just how far Tommy Bowden’s rebuilding project has yet to go.

And there was no letting up by FSU. Bobby Bowden left Weinke in to lead the Seminoles to their 47th point, and kept his starting defense in to prevent what would have been a consolation touchdown, midway through the fourth quarter.

When the starters finally came out, Clemson had basically quit. FSU backup Davy Ford broke an 82-yard touchdown run that left Tommy Bowden in shock, kneeling on the sideline, head in hands as the Florida State crowd chanted, “Who’s your daddy? Who’s your daddy?”

It was a victory that should impress poll voters, and surely keep Florida State well in the race to defend its national title. The Seminoles will try to cap a seventh perfect ACC season next week against Wake Forest (1-7), before closing the regular season Nov. 18 against No. 6 Florida.

The victory over Clemson might have been defined, if not decided, on Weinke’s 98-yard pass to Snoop Minnis in the first quarter.

Using a wonderful play-action fake in which he stood flat-footed in the end zone with his back to the line of scrimmage, Weinke turned suddenly and fired a laser downfield to Minnis, who had the fooled Clemson defensive backs beaten by 20 yards.

It was an easy sprint to the end zone from there, as Weinke and Minnis broke the record for Florida State’s longest touchdown pass, set by Jimmy Jordan and Kurt Unglaub in 1976, Bobby Bowden’s first season at FSU.

The touchdown gave Florida State a 10-0 lead. More telling – it offered a textbook example of the way good teams respond to bad breaks, stealing the momentum Clemson had just gained when punter Jamie Somaini nailed a 74-yard kick to the Seminoles’ 2.

Clemson had other chances to be competitive, but squandered most of them.

Trailing 10-7 in the first quarter, the Tigers used a good punt return to take over on Florida State’s 18. After three plays netted minus-2 yards, Tommy Bowden called a fake field goal, but it fooled nobody.

Late in the first half, Jason Holloman recovered a fumble in Florida State territory. Clemson quarterback Woody Dantzler answered with an interception on the next play.

The Tigers opened the third quarter with a nice defensive stand, but Dantzler fumbled on the first play after the punt. Florida State drove 50 yards and Randy Golightly scored his second touchdown to put the Seminoles ahead 30-7.

Later, the Tigers had an 85-yard touchdown pass nullified by an illegal procedure penalty.

Dantzler played the first 2 1/2 quarters despite the sore left ankle that has limited him the last two weeks. He finished 7-for-21 for 91 yards.