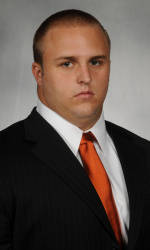 CLEMSON, SC – Clemson offensive tackle J.K. Jay announced Wednesday that his football career is over due to back injuries. The freshman from Greenville, SC had two back surgeries this past fall after initially suffering a back injury while lifting weights last summer.

“It is most important to me that I have a normal life when I am older,” said Jay, who will remain a Clemson student and serve as a student coach. “After talking to the doctors, it was obvious that by returning to the football field I would be at a high risk for serious injury. I want to be able to play with my kids when I start a family years from now.”

Jay enrolled at Clemson in January of 2009 following an outstanding high school career at Christ Church Episcopal School. A Shrine Bowl selection for the South Carolina team, he was the #86 player and #3 offensive tackle in the nation according to Tom Lemming and the #139 player in the nation by ESPN.com. He was also selected to play in the ESPN/Under Armour All-American game.

Jay had a strong spring practice at Clemson in 2009 and was listed as a co-starter at right tackle entering fall camp. But the back injury forced him to have surgery and red-shirt the season. He had another back surgery in December. He also had mononucleosis during the fall and had to drop out of school. He returned to campus on Wednesday and will continue his academic career this semester.

Jay will remain on scholarship, but as a career ending medical hardship, he will not be counted towards Clemson’s maximum 85 scholarship limit.