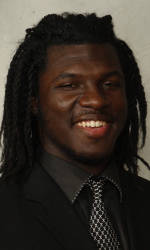 CLEMSON, SC – Clemson freshman linebacker Tony Steward suffered a torn ACL during practice on Tuesday and will be lost for the remainder of the 2011 season. Steward suffered the injury during a special teams drill.

Steward had played in five of the first seven games for the 7-0 Tigers and had five tackles and a pass deflection in 36 defensive plays. Steward was a first-team USA Today All-America linebacker out of Pedro Menendez High School in Hastings, FL.

“Tony suffered the injury while back-peddling in practice on a punt drill on Tuesday,” said Clemson Head Coach Dabo Swinney. “It is not the same knee he injured in high school (also a torn ACL). He will rehab and be ready to go in the summer. He is a hard worker and I know will be ready for next year.

“We plan to apply for a medical hardship to get the year back. We realize it will take a special waiver to have that granted by the NCAA.”