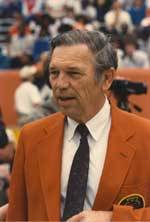 CLEMSON, S.C. – Bob Bradley, a legendary figure in Clemson athletics for over 45 years, passed away Monday afternoon at the Oconee Memorial Hospital in Seneca, SC. Bradley was 75-years-old. Bradley had been fighting bone cancer for three years and had been placed in the hospital two weeks ago for pneumonia and an irregular heart beat.

Funeral services for Bob Bradley will be held Wednesday at 2:00 PM at the United Methodist Church in Clemson. (For those of you familiar with Clemson University, it is across the street from Riggs Field, Clemson’s soccer facility).

A graveside service will follow on Cemetary Hill (which is located behind the press box). Visitation will follow in the Bob Bradley Press Box. All of this will take place Wednesday. There are no services on Tuesday.

Bradley served as Clemson sports information director from 1955-89 and in an emeritas capacity from 1989 until his death.

Bradley served as Clemson sports information director from 1955 to 1989, a 34-year period in which he received virtually every award attainable in his chosen field. His work ethic and quick wit are legendary. He worked 502 consecutive Clemson football games between October 20, 1955 and October 14, 2000.

The streak stopped on October 21, 2000 when he was in the hospital recovering from pneumonia and an irregular heart beat. He still has an active streak of having worked 313 consecutive ACC Basketball Tournament games, a streak that dates to March of 1956. He served as the official scorer for every tournament between 1967 and 1992.

Bradley, 75, was one of the most repected SIDs in his field on a nationwide basis during his 45 years in the profession. In 1988, the Clemson Memorial Stadium Pressbox was named in his honor.

In 1975-76 academic year, Bradley served as President of CoSIDA (College Sports Information Directors of America) and was inducted into the organization’s Hall of Fame. During his career, Clemson won countless publication awards and citations for service to the media. In fact, it was Bradley who devised the publication contests award system that the organization still uses today.

Bradley, a native of Randleman, NC began his association with Clemson in 1941 when he entered the college as a freshman. After serving a four-year stint in the Air Force, he returned to Clemson and served as editor of The Tiger, the student newspaper in 1948. Upon graduation in 1951, he began a career in sports writing with the Greenville News. He came back to Clemson in 1953 as secretary of the Alumni Association.

In October of 1955 he was hired by Frank Howard as Clemson Sports Information Director. Bradley and Howard were quite a team, bringing national acclaim to Clemson football for 15 years through the accomplishments of Howard’s teams on the field, and through Bradley’s publicizing of those accomplishments and Howard’s entertaining personality.