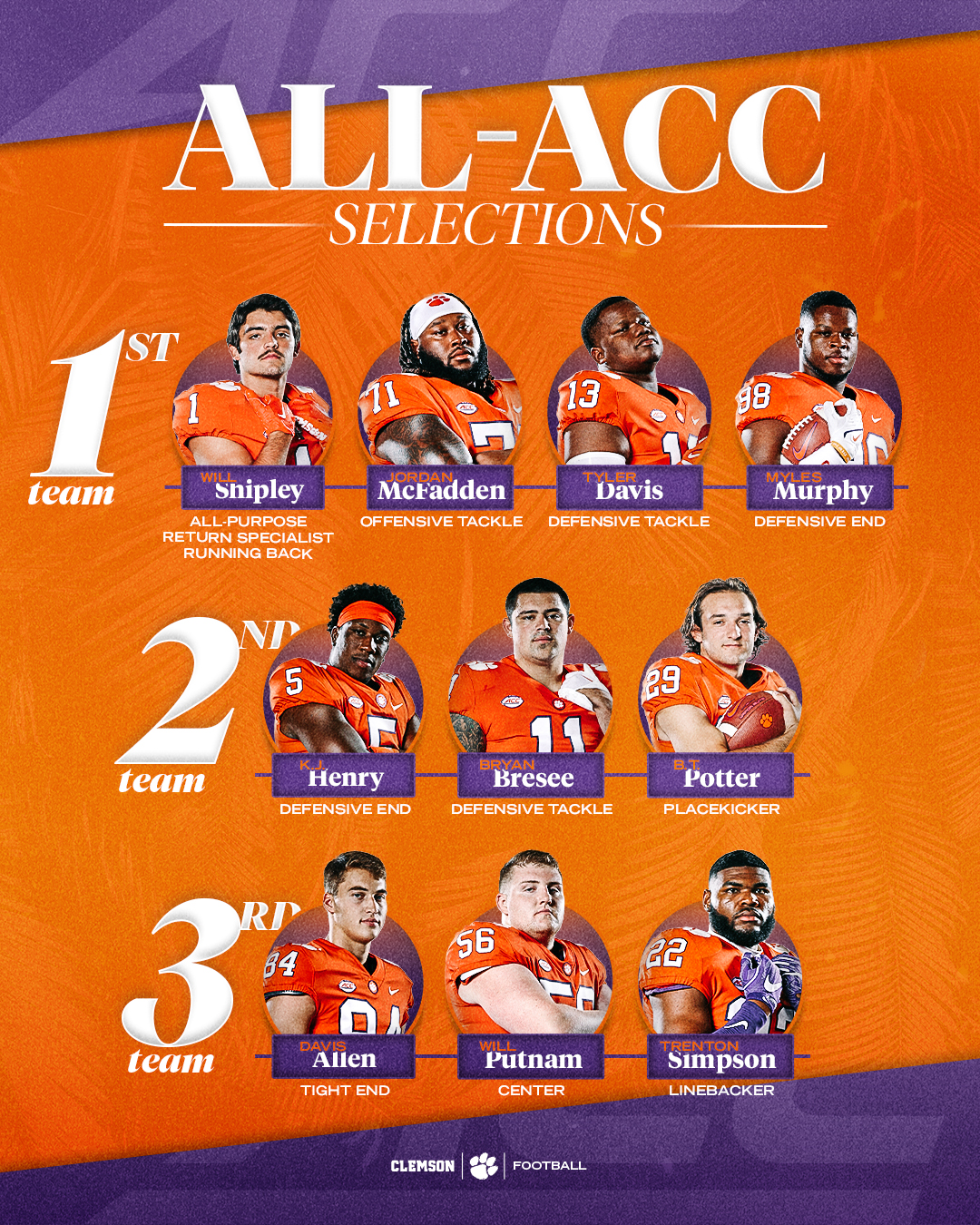 The Atlantic Coast Conference announced its 2022 All-ACC Team on Tuesday with 10 Clemson players earning a league-high 12 all-conference selections. Clemson was the only program to produce double-digit selections in 2022 and has now produced 10 or more All-ACC picks in each of the last eight seasons.

The full release from the Atlantic Coast Conference is included below.

The Tigers filled a total of 12 spots on the first, second and third teams, with sophomore Will Shipley becoming the first-ever player to earn first-team honors at three positions with his selection at running back, all-purpose and specialist.

The All-ACC teams were chosen by a voting panel of 51 media members and each of the league’s 14 head coaches for a total of 65 voters. Three points were awarded for each first-team vote, two points for each second-team vote, and one point for each third-team selection.

Abanikanda and Shipley (1,092 rushing yards) are joined in the All-ACC first-team backfield by North Carolina freshman quarterback Drake Maye, who currently leads the nation in total offense with 4,476 yards and earned 177 total points in the All-ACC balloting.

Flowers (1,077 yards and a league-high 12 TD receptions) and Downs (11 TD catches with an ACC-leading 83 receptions and 92.9 receiving yards per game) are joined on the first-team receiving corps by Wake Forest’s A.T. Perry (70 receptions, 980 yards, 11 touchdowns). Syracuse’s Oronde Gadsden II is the first-team tight end after hauling in 54 passes for 891 yards and six TDs.

ACC Jacobs Blocking Trophy winner Jordan McFadden was the leading vote-getter among offensive linemen, and the Clemson standout is joined at the other first-team tackle position by Graham Barton of Duke.

NC State’s Aydan White and Virginia’s Anthony Johnson were selected as the first-team cornerbacks, with Miami’s Kam Kinchens (the ACC’s leader in interceptions with six) and Florida State’s Jammie Robinson at the safety spots.

Dunn (177 points in the voting) is the ACC’s all-time leading scorer and owns the nation’s top accuracy rate on field goals this season at 24-for-25. Hedley ranks third in the ACC in punting average (45.3) and placed 23 of his 47 attempts inside the opponents’ 20-yard line.

Please see below for the lists of the 2022 All-ACC Football First, Second and Third Teams (with voting points totals), as well as Honorable Mention selections.