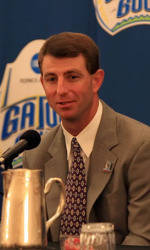 Clemson Head Coach Dabo Swinney “I want to thank the Konica Minolta Gator Bowl for this week. It has been an awesome week in every way for our team. The weather has been chamber of commerce, the bowl activities have been great and the practice facility was outstanding. We are looking forward to playing this game in a great NFL facility on Thursday. We are pleased to represent Clemson University in this game.”

“Nebraska is an outstanding opponent. It is a game that has meaning in Clemson football history because the two schools played for the national championship in the Orange Bowl in 1981 (Jan. 1, 1982). Our fans are really excited and so is our team. Our players know about the Nebraska tradition.”

“I don’t know what type of game this will be. There have been a lot of high scoring games this bowl season and in recent Gator Bowls. I don’t know why that is. I know we don’t really want to get in that type of a game. It will be difficult for us to win a high scoring game with Nebraska. We have confidence in our offense, but this is a Nebraska team that averages 36 points a game. We allow 17 points per game, so we are more comfortable with a lower scoring game. It will be strength on strength when Nebraska has the ball, but, our offense has improved and Nebraska’s defense has improved over the second half of the year.”

“You have to be impressed with Joe Ganz, their quarterback. He is the key and is a big reason for their balance. We have to be worried about his legs as well as his arm. They are a balanced team with 25 rushing touchdowns and 27 passing touchdowns. He completes 70 percent of his passes and that is impressive.”

“I have been asked about some of our milepost games this year. I think the Georgia Tech game was a milepost, even though we lost the game. We made some progress that week, especially in intangible areas, in a short period of time. When I looked into the players eyes after the game, even though we lost, I could tell we were still together.”

“Then, of course we won the next game at Boston College and that was a big confidence builder against a team that had been our nemesis the last three years. We had not beaten Boston College in 50 years, and we came back to win after trailing in the fourth period, so the way we won was special also.”

“And of course beating South Carolina was a big victory for us. I don’t think we have played a complete game, a game that we have said, `this is the best we can play.’ But the South Carolina game was our best game so far this year. But, we still have some room for improvement. We missed a couple of field goals and had a couple of turnovers in that game.”

“Coming to Jacksonville is special for our program. We have a picture of The Landing as you exit our locker room on the way to the field from the stadium. We have a lot of players on the team from Jacksonville and 19 are from Florida, so this is a key recruiting area for us. And, of course there is a great tradition of Clemson in the Gator Bowl dating to 1948 when Frank Howard won his first bowl game here against Missouri.”