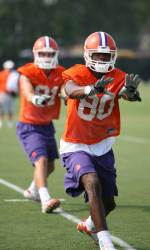 Clemson, SC – Clemson held its third practice in shorts and helmets on Monday evening. The practice ran from 5:45 PM to nearly 9:00 PM, the latest ending to a preseason practice on the schedule. Monday was the next to last day of summer school and head coach Tommy Bowden scheduled the practice around the academic schedule.

The Tigers will have their last day in shorts and helmets on Tuesday, then go in full uniform for the first time on Wednesday morning. ‘It was another hot day, so it was good that we went as late in the day as we did,” said Bowden. “But it was still humid and hot for the entire practice. The players didn’t give in, however, we had another good practice.”

Bowden singled out some freshmen after the practice. “Scotty Cooper had a good day at linebacker. He looks good in the drill work so far. He has the ability to hit and disengage the blocker.

“Brandon Clear looked good at wide receiver, he really jumped out at me on offense. He is faster than we thought and has the size and range. If he continues to play that well we will find a place for him. I was also impressed with Marcus Gilchrist and Jarvis Jenkins today.”

Bowden also commented on the progress of Sadat Chambers, a letterman last year as a safety, who has been moved to running back. “Sadat has done well. You can see he has some natural instincts when it comes to playing running back. I am anxious to see how he does when we scrimmage.

“Ray Ray McElrathbey has also done well. Competition tends to motivate. He is limited a bit playing with a knee brace as he recovers from the knee surgery he had this summer. “

Bowden said his team was in the most challenging part of the preseason. “This will be the only time all year we practice eight consecutive days. We will go the full eight days and practice twice on Thursday. Next week I will reevaluate the two-a-day schedule. A lot of the NFL teams are cutting out the second practice. I can see a time when the NCAA will outlaw two-a-days. There always seems to be a trickle down effect from the NFL to college.”