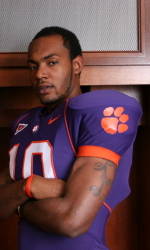 Clemson, SC-Defense dominated most of the action during a 90-minute Clemson football scrimmage on Monday afternoon. The Tigers were suppose to scrimmage this past Saturday morning, but inclement weather forced cancellation of that practice.

“The defense had the upper hand,” said Clemson Head Coach Tommy Bowden. “The offense scored early on a good drive that ended in a touchdown pass from Cullen Harper to Aaron Kelly. But after that it seemed like the offense went backwards a lot.

“We will have to look at the film and see if the problems were in terms of assignments on the part of the offense, or if the defense was just dominant physically. The offense seemed to have the upper hand last Wednesday when he had a half scrimmage.”

The scrimmage was played without officials and quarterbacks were not tackled, which led to many called sacks when defenders got close to Clemson quarterbacks. Harper completed five of his first six passes for 78 yards. He connected on a 31-yard scoring pass to Aaron Kelly on the first offensive possession.

The overall star from an offensive standpoint was freshman Marquan Jones, who had seven receptions for 117 yards and two touchdowns. He scored on a 24-yard touchdown pass from Michael Wade and a 15-yard scoring pass from Harper.

The defense had three interceptions, one apiece by Chris Chancellor and Coty Sensabaugh.

Clemson will continue practice on Wednesday and conclude the spring practice session with the annual Orange-White Game on Saturday, April 12 at 1:00 PM at Clemson Memorial Stadium.