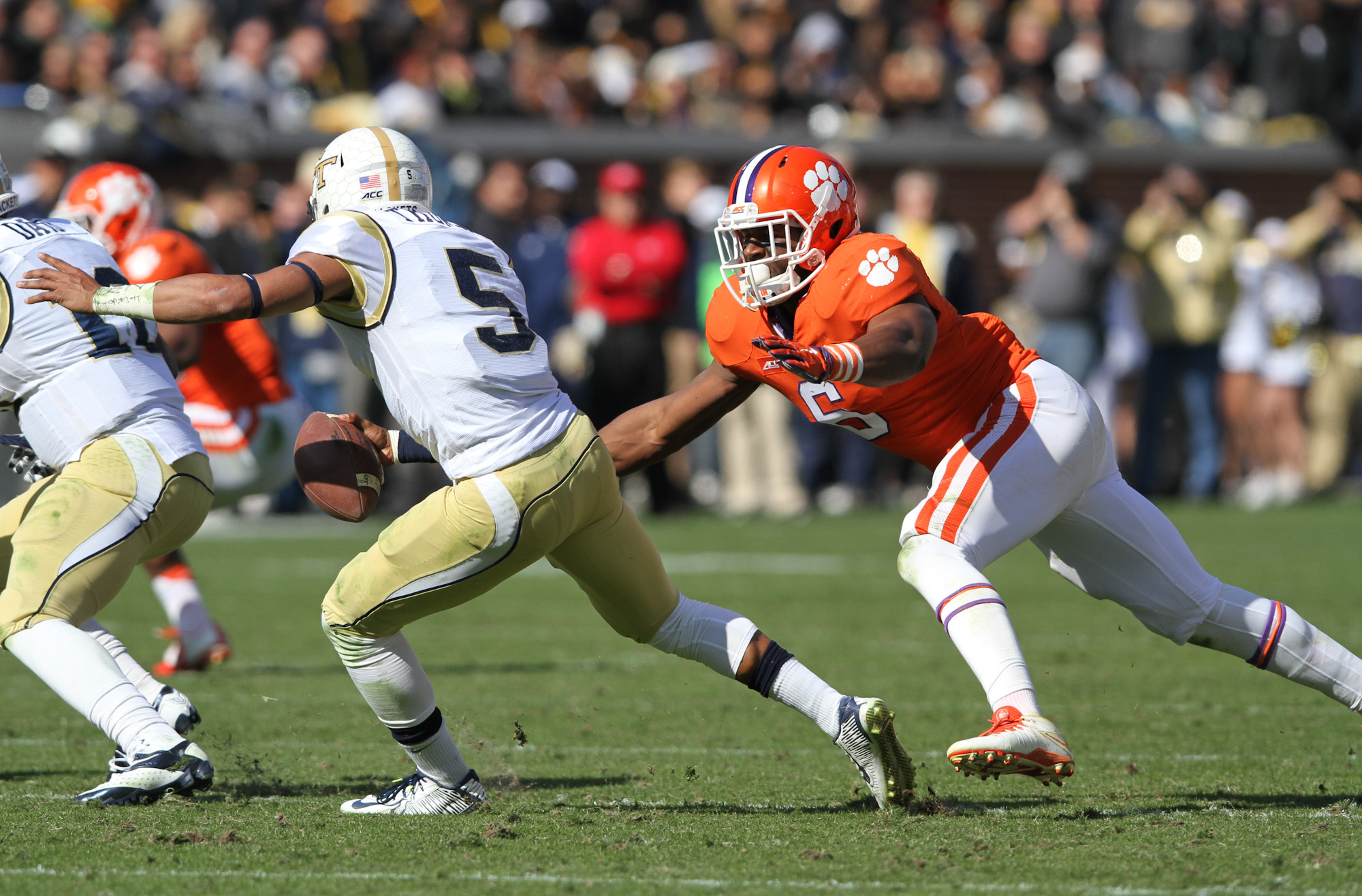 Clemson, S.C.-Clemson had a 100-play scrimmage in Memorial Stadium on Wednesday afternoon, the second of three spring scrimmages for Dabo Swinney’s team. The final scrimmage will be the annual spring game on Saturday, April 8 at 2:30 p.m. at Memorial Stadium.

It was a productive day for the Tigers, who worked for over two hours in brilliant sunshine and 80 degree weather. “I saw a lot of good out there today,” said Swinney, who is in his 10th year as Clemson head coach. “We were solid on both sides of the ball.

“There are always areas you want to improve. We didn’t have a single procedure penalty in the first scrimmage and today we had way too many. But overall, it was a good day. The guys worked hard.”

Swinney threw a curve at the players when he announced at a team meeting Wednesday that the scrimmage would be 100 percent live. That meant the quarterbacks would be tackled to the ground, the first time Swinney has done that in a number of years for a scrimmage.

“I thought it was the right thing to do as we evaluate the quarterbacks and the defense for that matter. I didn’t tell anyone until this afternoon. All the quarterbacks handled it well and they all came through it healthy.”   None of the four quarterbacks threw an interception.

First-team quarterback Kelly Bryant was 8-14 for 94 yards. He also had a rushing touchdown. Zerrick Cooper was 4-10 for 28 yards and a touchdown, while Tucker Israel was 7-13 for 37 yards. Freshman Hunter Johnson completed 5-11 for 110 yards and a score.

“Hunter took a step forward today,” said Swinney. “It was his best day.”   Johnson completed a 31-yard scoring pass to Trevion Thompson and also hit on a 48-yard pass to Diondre Overton that set up a score.

Cornell Powell was the top receiver with five catches for 78 yards, while red-shirt freshman T.J. Chase had five catches for 41 yards.   Overton had 2-51 to rank second in yardage.   Thompson had three catches for 35 yards, but two of the catches went for touchdowns, one from Johnson and one from Cooper.

Clemson had some strong performances from the running backs. Tavien Feaster was the top rusher with 7-54, while C.J. Fuller had 8-48 and a touchdown.

“The defense played well with the exception of the defense coming off the goal line.” Three times Swinney put the ball on the one-yard line and each time the offense came off the goal line to make a first down, including a 38-yard completion from Bryant to Powell.

“Dorian O’Daniel was a player who stood out on defense and you can’t help but notice our defensive line. Dexter Lawrence had a tackle for loss on the first play and Clelin Ferrell and Christian Wilkins both had sacks.   Clelin had a sack during the two-minute drill at the end of the scrimmage and forced a fumble on the play.

Isaiah Simmons led all tacklers in the scrimmage while O’Daniel and Chad Smith had five apiece. O’Daniel, a rising senior, had the best all-around performance of the defenders with two sacks and a pass broken up.

No scholarship players missed the scrimmage due to injury and no new injuries were reported.