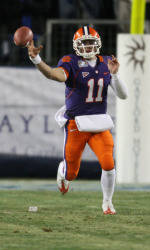 Clemson, SC-Jonathan Willard had two interceptions and a pass deflection to lead a strong defense during Clemson’s second spring scrimmage at Memorial Stadium. It was Clemson’s 11th practice of the spring. The Tigers will conclude their spring season next Saturday with the annual Spring Game at Death Valley at 4:00 PM.

Starting quarterback Kyle Parker was held out of the scrimmage due to a minor back injury. Parker started all 14 of Clemson’s games last year, leading the Tigers to nine victories, tied for the most in the nation among freshmen quarterbacks last year.

Tajh Boyd quarterbacked the first team offense for the entire day and completed 4-11 passes for 39 yards and a touchdown. Boyd also had 17 yards rushing in six carries, including a 32-yard run that was the longest offensive play of the day. He also threw a 25-yard scoring pass to Andre Ellington for the only touchdown by the offense in the scrimmage. Ellington was the most productive player on offense with four receptions for 51 yards and nine rushes for 26 yards.

Mike Wade ran the second unit and completed 6-12 passes for 60 yards. He also had 12 yards rushing on four carries. Darrell Smith, a red-shirt freshman tight end for Gadsden, AL, had two catches for 19 yards and continues to play well at his new position.

Richard Jackson had a strong day kicking field goals as he made 4-5 include pre scrimmage practice. Spencer Benton was 3-5.

“The defense was dominant,” said Clemson Head Coach Dabo Swinney. “You will never hear me complain about having a dominant defense. The difference between our offense and our defense is the depth, especially in the line. The next step for our defense is to play this way on a consistent basis.

“I have been very impressed with Marcus Gilchrist. He is as good a player, as smart a player, as we have on this team.”