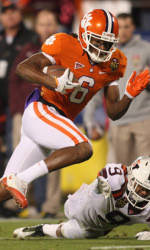 CLEMSON, SC – Wide receiver DeAndre Hopkins had 160 receiving yards to key the offense, and linebackers Corico Hawkins and Tig Willard had seven tackles apiece to lead the defense during a football scrimmage at Clemson Memorial Stadium on Monday.

It was the final full scrimmage for Dabo Swinney’s Tigers prior to Saturday’s Spring Game at Death Valley at 4 PM. Admission is free and there will be no live television of the game. The game will be broadcast on the Clemson radio network.

Clemson Head Coach Dabo Swinney was pleased with his squad’s performance. “We showed improvement in a lot of areas, but we are still not consistent enough overall.

“Tajh Boyd got better today. He responded and showed some leadership. He made a couple of mistakes early (two interceptions), but came back to have one of his better days.

“The player of the day was Nuke Hopkins. He has been the epitome of consistency. He has played all spring like you need to play to be a top 10 program. I was also pleased with Rod McDowell, and Tony McNeal had a good day, perhaps his best day of the spring. Matt Porter is a walk-on with four years of eligibility and you are going to hear about him.

“The offensive line did some good things. Kalon Davis continues to improve and I think Tyler Shatley can be a difference maker.

“Defensively, Grady Jarrett has been consistent in the trenches along with DeShawn Williams. Justin Parker is coming along at linebacker. He has been fun to watch improve and he is instinctive. I am also excited about Bashaud Breeland and Darius Robinson in the secondary. Darius has responded to competing against Sammy Watkins in practice. Sammy is making Darius better each day.”

Zac Brooks, a first-year freshman who entered in January, had five rushes for 26 yards. D.J. Howard had 5-17 rushing and Mike Bellamy had 7-17 rushing and a seven-yard reception.

Hopkins had 160 yards receiving on six receptions, while Eric Mac Lain had 2-30. Porter had the 54-yard touchdown catch, plus two rushes for 25 yards.

Travis Blanks, a true freshman from Tallahassee, FL, had a 27-yard interception return and senior Xavier Brewer also had an interception. Malliciah Goodman had a sack and a force fumble.