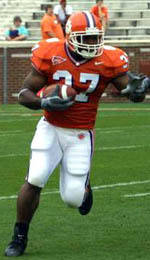 Clemson, SC – Clemson held its second major scrimmage in Death Valley on Tuesday morning and early afternoon. It was the final preseason practice day for Tommy Bowden’s program, as school begins on Wednesday.

The Clemson running game was efficient, yet the defense had the overall upper hand according to Bowden, whose Tigers open the season September 4, 2004 against Wake Forest. Reggie Merriweather led the ball carriers with 14 carries for 70 yards and a touchdown, while Kyle Browning had 8-34.

Yusef Kelly, Clemson’s starting tailback who had 12-88 in the opening scrimmage, gained 30 yards in nine carries. Wide receiver Chansi Stuckey added 42 yards in three carries, including a 32-yard touchdown run for the first score of the scrimmage.

“Again, I was pleased with the performance of all three running backs,” said Bowden, who is looking for a replacement for injured starter Duane Coleman, who could miss the first three or four games of the season with a broken foot. “All three have run with authority. Reggie and Yusef ran hard again today, but Kyle Browning has had some exciting runs as well.” Browning actually started two games last year, more than Kelly and Merriweather combined in 2003.

Quarterback Charlie Whitehurst was 6-15 for 89 yards, while backup Will Proctor was 12-19 for 123 yards. Whitehurst picked up 28 yards in just four carries and Proctor scored a touchdown on a two-yard run. Bowden was quick to point out that Whitehurst’s passing numbers were deceiving. “I had some `must see’ plays early in the scrimmage that were not exactly high percentage passes. I wanted to see how the defense would react in those situations.” Late in the scrimmage Whtehurst completed a 40-yard pass to Stuckey against the first-team defense.

The top receiver from a receptions standpoint was sophomore Kelvin Grant, who had three catches for 19 yards. Chris Jefferson had 2-53, including a 44-yard bomb from Proctor. Jefferson later dislocated a finger, but the injury is not serious. Stuckey completed the scrimmage with two receptions for 49 yards and Airese Currie also caught a pair of passes for 18 yards.

The defense was again led by defensive end Charles Bennett who had seven tackles, including a tackle for loss. Trey Tate, David Dunham and Tramaine Billie had six tackles apiece, while Anthony Waters had four tackles, a tackle for loss and a diving interception in the endzone to end a first-team offense drive. Nick Watkins and Jamaal Fudge also had interceptions and Tate had a fumble recovery.

“The defense played well again today. Waters has had a steady preseason and he has gotten better and better every time we scrimmage. David Dunham, Nick Watkins, C.J. Gaddis and Sergio Gilliam also stood out today. We had a few mental mistakes that led to penalties on defense in the redzone and we will correct that.”

Bowden was pleased with his senior class for their effort on Tuesday and throughout the preseason. He met with the group at the conclusion of the scrimmage and held the seniors out of conditioning run at the conclusion of the day’s work. “I can’t remember a senior class that has stayed this healthy through the preseason. They are showing good leadership to the underclassmen and that is important. We had great leadership from our seniors at the end of last year and that was a key to our 4-0 finish.”