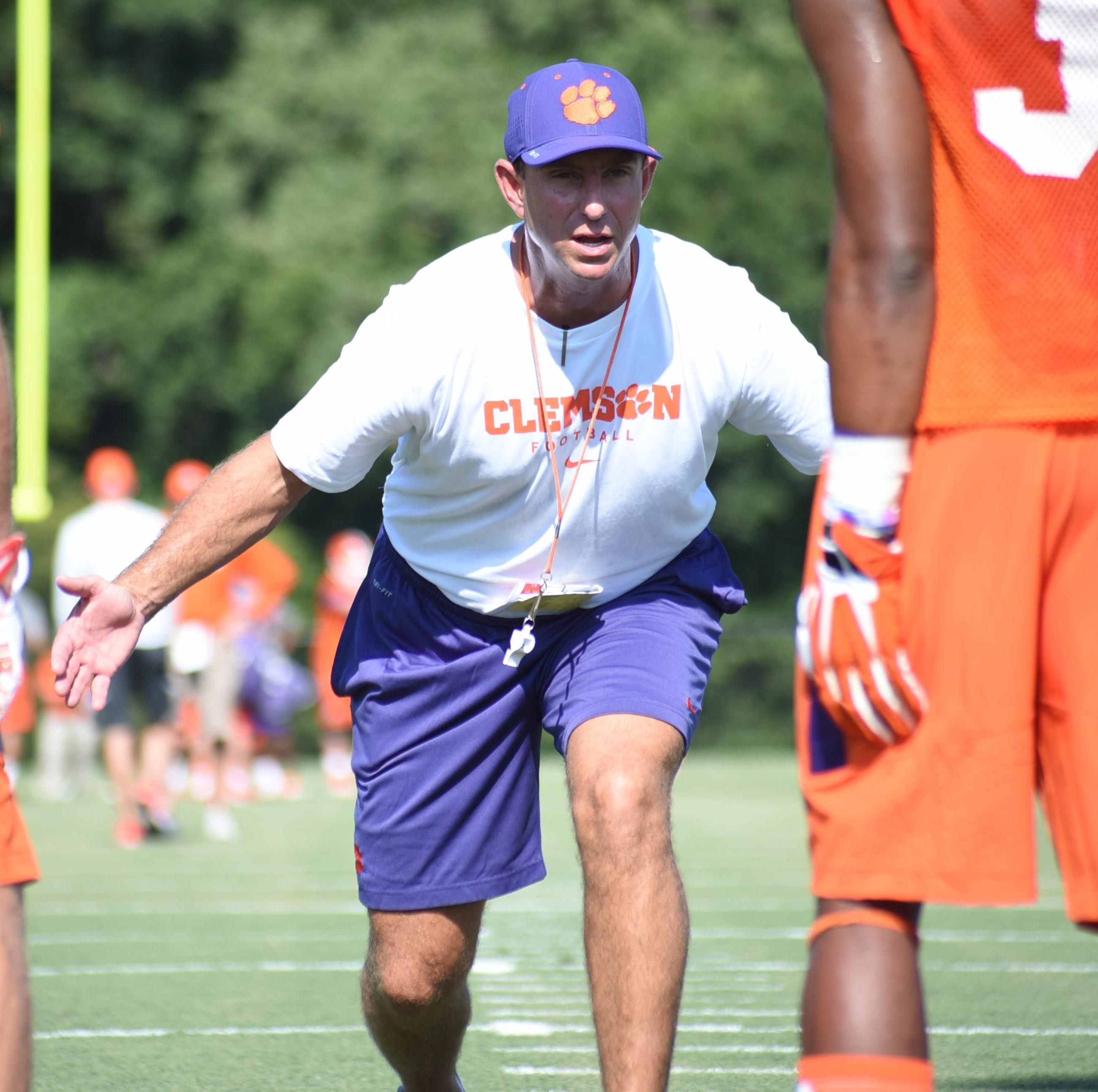 CLEMSON, S.C. — Clemson held its second practice of the preseason in helmets, jerseys and shorts on Wednesday. It was another productive day for the 12th ranked (USA Today, Sports Illustrated) Tigers, who open their season September 5 against Wofford.

The media is allowed to watch practice this week and many noticed the play of the young wide receiver corps. The first question to Coach Swinney about the group concerned freshman Deon Cain of Tampa, Fla.

“Well, that is recruiting for you,” said Swinney, with a smile. Cain was a consensus national top 50 player coming out of high school. “He has done very well, but the best receiver through the first two days has been Trevion Thompson.

“Trevion has really improved. He sat out last year and learned and got better. I have been very impressed with him and all the guys at that position really.”

Cain did make a diving catch on a long pass from Deshaun Watson during a team passing drill. Watson was sharp, completing 12-15 passes for 216 yards during the seven-on-seven and team passing segments of the practice.

Swinney also talked about Mike Williams, who led Clemson in reception yards last year with 1,030.  “Mike can be another Nuk Hopkins. He is stronger than Nuk, but he needs to develop the killer instinct Nuk had here and continues to have at the next level. “

Swinney also commented on the tight end position, a position he said should be improved this year. “We are much deeper at tight end than we were last year. We really were hit by injuries there last year. Now we have Cannon Smith, Milan Richard, D.J. Greenlee and Garrett Williams in the mix, and Jay Jay McCullough has been good so far. They give us a big shot in the arm.

“Stanton Seckinger is coming off of injury, but he will be a big contributor. And, I have been very impressed with what I have seen from Jordan Leggett.” Leggett made a brilliant diving catch during the team pass practice.

The Tigers will wear some pads (shells) on Thursday and eventually put on the full uniform for Saturday night’s practice. “I have been pleased with what I have seen so far, but in shorts there is only so much you can do. You can work on assignments and being in the right place, but football is a game of physical and mental.”

Swinney said after practice that quarterback Tucker Israel  will have surgery on his broken foot on Friday. Israel suffered the injury within the first few periods of the first practice on Tuesday. He is expected to miss at least four weeks. The only other player to miss practice due to injury on Wednesday was linebacker Korie Rogers. He is expected to return soon.