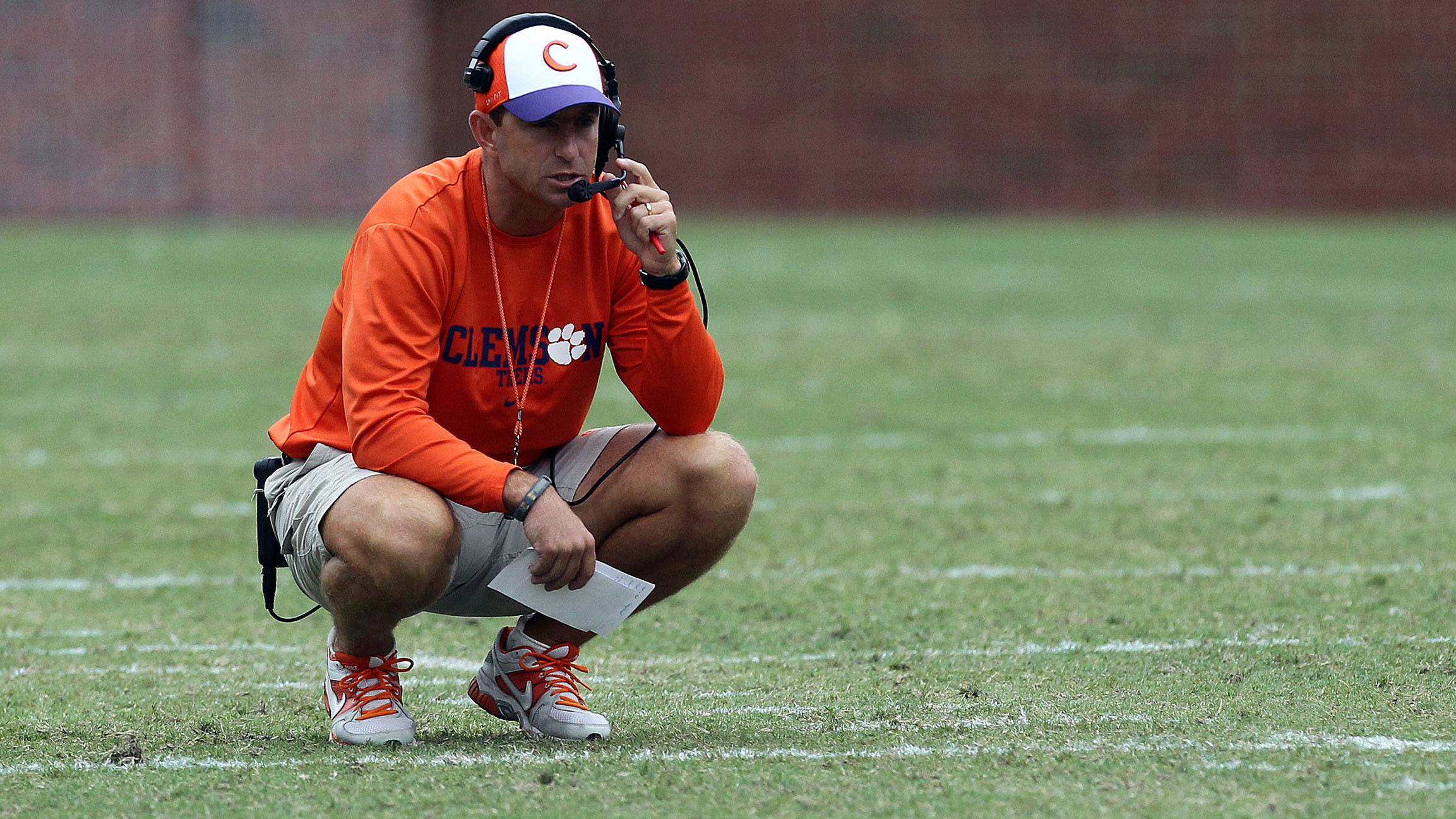 CLEMSON, S.C. – Dabo Swinney‘s Clemson Tigers held their second major scrimmage of the spring on Monday afternoon. The Tigers worked for a little over two hours in the indoor practice facility. The facility continued to serve the program well as it rained most of the day in Clemson.

Freshman quarterback Deshaun Watson suffered a slight crack in a collarbone near the end of the scrimmage. He will be out for three weeks, which means he will not play in Clemson’s Spring Game on Saturday.

“He played the entire scrimmage,” said Swinney. “I am not really sure when he suffered the injury and I was not aware of it until after I met with the media after practice.

“This is a shame because he was having an outstanding spring,” said Swinney of Watson, one of the top high school quarterbacks in the nation last year. “Fortunately this is not a serious injury. I hate that he will miss the Spring Game. I know a lot of people were anxious to see him make his debut in Death Valley.

“But he will be fine by the time summer workouts start again in May. He does not require surgery.”

The Tigers ran 90 plays during the scrimmage that featured short-yardage, two-minute drills, drives coming off the one-yard-line, goal line and overtime situations.

Four quarterbacks (Cole Stoudt, Chad Kelly, Deshaun Watson and Nick Schuessler) worked during the scrimmage and all performed well according to Swinney. But, by and large, the defense showed improvement over the first scrimmage held on March 31.

“Overall the defense was improved over last Monday’s scrimmage,” said Swinney, who is preparing his Tigers for the Spring Game this Saturday at Death Valley at 4 p.m. “The defense put more pressure on the quarterback (three sacks) and forced a couple of turnovers. The defense held the offense out of the endzone most of the day until short yardage.

“The offense did better in goal line and in two-minute drill. That is something that I have been pleased with. The offense has scored a game winner five of six opportunities in the two minute drill.”

Swinney did say there were plenty of things to work on in the final week of spring practice. “I was disappointed in the execution in some situations. There were too many penalties on both sides of the ball. If we want to go from number-seven (last year’s final national ranking) to number-one we can’t do that.”

As has been the case after nearly every practice, Swinney was asked about the quarterback race to replace three-year starter Tajh Boyd, who attended the scrimmage. “All have had good days and had some not so good days, but it is a very competitive situation. I don’t see us determining a starter until August. There is no obvious front runner.”

Ryan Norton returned to practice at center, but Eric Mac Lain continues to miss practice due to a toe injury. Swinney also reported that senior Sam Cooper is out for the rest of spring due to a shoulder injury. Defensive back Taylor Watson suffered a knee injury during the scrimmage and will miss the Spring Game.