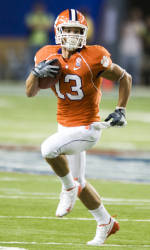 Clemson held its second practice at Jacksonville University on Sunday afternoon, as the Tigers prepare for their meeting with an 8-4 Nebraska team in the 2009 Konica Minolta Gator Bowl on Thursday.

The Tigers had their second of four scheduled practices at the Jacksonville University football facility and it was the most physical practice the Tigers will have in Florida outside of the game. The Tigers worked for two hours in full pads with lots of full contract drills.

Dorell Scott was at practice but in a limited capacity as he recovers from a knee injury suffered in practice on Saturday. But, he is expected to be ready for the game on Thursday. Xavier Dye, who missed the last half of Saturday’s practice with a knee injury, was back full go on Sunday.

“We had an outstanding practice today,” said Swinney. “It was a good physical practice. We will cut back from a physical standpoint over the last two practices. Our goal was to do most of the physical preparation in Clemson and to install the gameplan. We did that during our time in Clemson. “

For many of the periods the number-one offense went against the number-one defense. “I was happy with the way the offense responded today. They had a good day throwing the ball and running it.” Cullen Harper hit a couple of touchdown plays to wide receiver Willy Korn also hit tight end Durrell Barry on a score in one of the drills.

After practice, Swinney took some time with the media to respond to some questions about the Nebraska offense. “They have really played well on offense and it will be a terrific challenge for our defense. Joe Ganz has been outstanding at quarterback, a record setting quarterback for Nebraska. They have seven straight games with at least 400 yards total offense and average 36 points per game. They have their all-time leading receiver and an 800-yard rusher. They are perhaps the most balanced team we have faced all year.’

Clemson has two practices remaining in preparation for the contest. Clemson will work at 11:15 AM on Monday and Tuesday at the Jacksonville University facility.