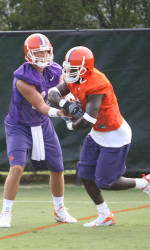 Clemson, SC – Clemson held a rare Sunday practice, its second consecutive day of eight days in a row to open the preseason schedule. The Tigers worked for three hours on the practice fields behind the Jervey Athletic Center. Clemson is preparing for its season opener against Florida State on Labor Day evening (September 3) in a game that will be nationally televised by ESPN.

There were major thunderstorms in the Clemson area on Sunday afternoon, but they missed hitting the Clemson practice fields, allowing the Tigers to stay on schedule. “There was a lightning strike at 3:00 PM, so we had to stay inside until 3:30 PM,” said Bowden. “But we were scheduled to start at 3:45 PM. We never had another strike so we got everything accomplished on time.”

The Tigers had a long but productive practice in shorts for the second straight day. “It was a good practice, the rain that fell earlier cooled it down a little bit, but it was still hot and sticky. This was the second day of eight days in a row of practice. We did not condition at the end of practice because we want these first eight practices to be efficient. It is going to be in the high 90s the rest of the week. We want those fifth, sixth, seventh and eighth days to be as efficient as the first.”

Bowden was asked about the performance of Rashaad Jackson and kicker Mark Buchholtz after practice. “I singled out Rashaad Jackson in the team meeting on Friday night. He is an example of a guy who has really worked hard in the off season. I singled him out a lot in the spring and he continued to work hard over the summer. His body fat percentage has dropped dramatically and he is at about 275 pounds (down from 290 last season). He has also shown good leadership skills and has been outstanding academically.” Jackson made the ACC Academic Honor Roll for the 2006-07 academic year, meaning he had at least a 3.0 GPA for the full year.

Bowden also said kicker Mark Buchholtz, who is attempting to play soccer and football for Clemson this fall, has continued to progress. “We were aware of him out of high school when Trevor was recruiting him for soccer, and he has come out in the fall the last two years. His performance in the spring was not a surprise. We know he has a good strong leg. We are confident he can do the job.”

Buchholtz has not kicked in a football game since he was a senior in high school in 2003, but he was 3-3 on field goals in the Spring game in April. He will be in his fourth year as a starting midfielder on Trevor Adair’s soccer team this fall. He has been a starter on two Sweet 16 teams, including Clemson’s Final Four team of 2005. His schedule will start to get very busy on August 13 when soccer practice will also begin.

Clemson continues its preseason practice schedule Monday evening. All practices are closed to the public, but the team will hold its annual Fan Appreciation Day at Clemson Memorial Stadium on Sunday, August 12 at 3:00 PM.