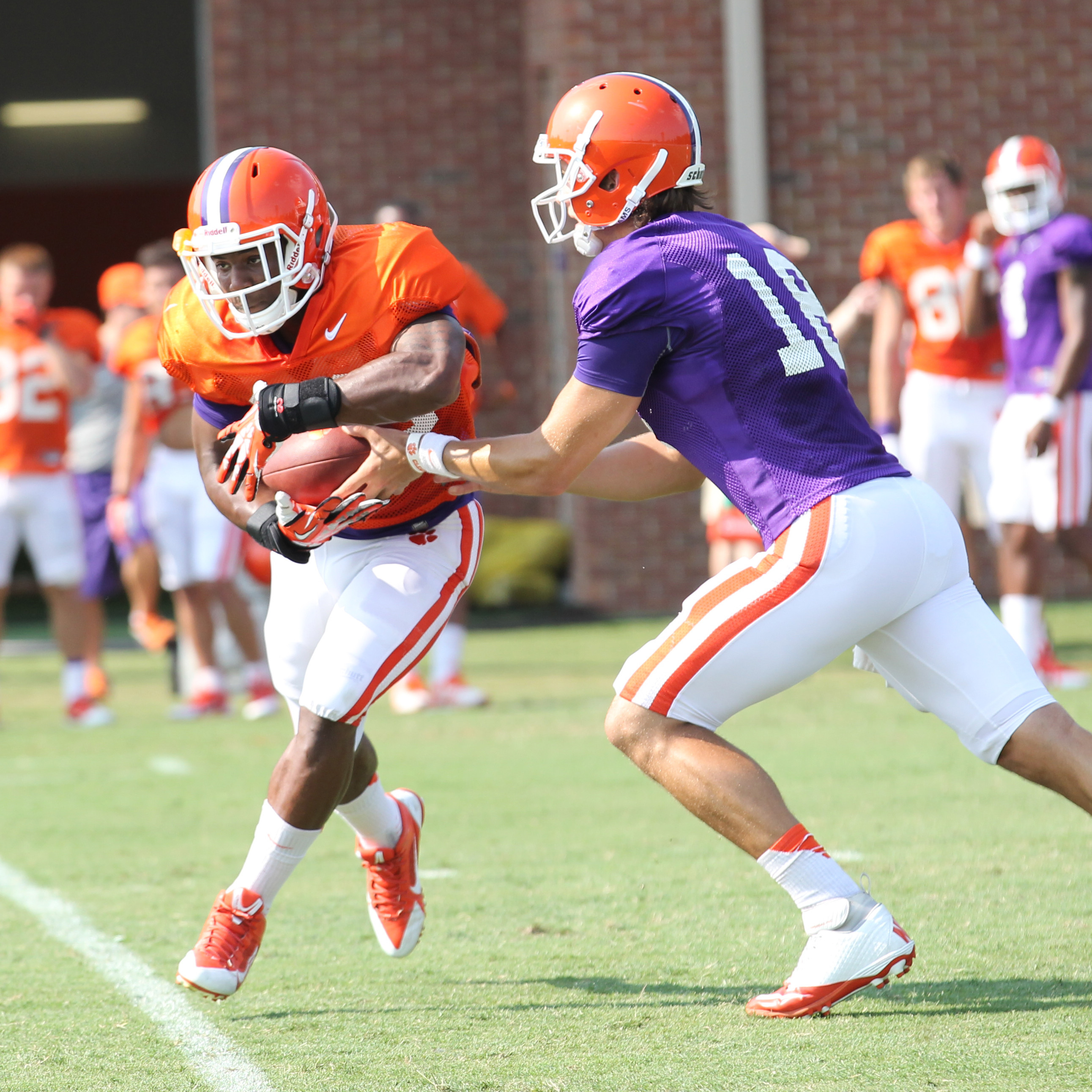 Clemson, S.C.—Clemson held its sixth practice of the preseason in 90 degree heat on Thursday. The Tigers will have their first two-a-day on Friday, once in the morning and once at night. “Today was a tough, challenging practice,” said Head Coach Dabo Swinney.  “We scripted it to be tough and I liked how they pushed through it.   We did a lot of goal line work.   It was a long practice and I liked what I saw in the conditioning period at the end as well.  There was a better all around mindset today. We got the most out of it.” One player who got the most out of it was offensive tackle Joe Gore.  “Joe has really improved.  He has caught my eye on tape and in person.  We need someone to step up at offensive tackle and he has so far.” Swinney also liked what he saw from the freshman wide receivers.  The Tigers must replace All-American Sammy Watkins and fourth-round draft choice Martavis Bryant.  The duo combined for 143 receptions for 2,292 yards and 19 touchdowns last year. “Our young wide receivers are doing well.  Artavis Scott, Demarre Kitt and Kyrin Priester have all done a good job so far. Trevion Thompson is doing well also, but you can tell the other three benefitted by getting here in January.  “I am also cautiously optimistic in what I have seen from Germone Hopper.  He has been focused in camp.  I have not heard him (talk) much, but he has been loud with his play on the field.” Four Tigers to Miss Practice on FridaySwinney said that four players will  be excused from practice on Friday as they will graduate from Clemson during ceremonies at Littlejohn Coliseum.  The four active players who will graduate are Vic Beasley, Reid Webster, Martin Jenkins and Taylor Watson.  Two former players, Dwayne Allen (now with the Indianapolis Colts) and Darrell Brevard, also will graduate on Friday. “I always give the day off to players on their graduation day,” said Swinney.   “It is a special day that should be spent with family and friends.  I am proud of these four young men.  This is an accomplishment they should all be proud of. “ Four other current Tigers already have their degrees.  Those players are Sam Cooper, Corbin Jenkins, David Olson and Josh Watson. Thus, Clemson will have eight graduates on the roster this year.   The program has had an excellent graduation rate under Swinney.  In his first five years 83 of the 90 seniors on the roster have earned an undergraduate degree 92.2 percent.