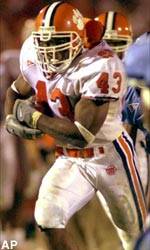 CHAPEL HILL, N.C. — Clemson backups sure have a knack for making a name for themselves against North Carolina.

Willie Simmons, a redshirt freshman, replaced the injured Woodrow Dantzler in the second quarter and matched a school record with four touchdown passes to rally the fifth-ranked Tigers to 38-24 victory Saturday night.

Last year, it was Dantzler who replaced an injured Brandon Streeter and led Clemson to a 31-20 win over North Carolina.

But this time, the stakes were much higher. The Tigers (8-0, 6-0 ACC) are one of five unbeaten teams remaining and a loss would all but knock them out of the national championship race. So when Dantzler went out a bruised left ankle and his team trailing 17-0, the Tigers looked to be in deep trouble.

Turns out they didn’t need their Heisman Trophy contending quarterback.

“I’ve been waiting for this moment all my life,” Simmons said. “Nervous? If you’re not nervous, something is wrong with you.”

With Simmons in the game, the Tigers’ high-scoring offense came to life against the Tar Heels (3-4, 1-4).

“We knew he was a good player, similar to Dantzler,” North Carolina coach Carl Torbush said. “And he was in top form. He made plays and we didn’t.”

Simmons, who had thrown just 28 passes this season, entered the game with 6:33 to go in the second quarter when Dantzler left after a 24-yard run. Dantzler, sixth nationally in total offense at 298.5 yards per game, did not return although coach Tommy Bowden said his star could have if needed.

After throwing a “lame duck” pass on his first play – the ball appeared to slip out of hands and was not close to any receiver – the 6-foot, 190-pound Simmons never missed a beat. He threw a 29-yard touchdown pass to Jackie Robinson and then hooked up with Rod Gardner on scoring passes of 20, 43 and 25 yards. His 43-yard TD pass put the Tigers ahead for good at 24-17 with 5:25 left in the third period.

“The first thing everybody wants to do when somebody comes in is point the finger at me,” Simmons said. “I didn’t do this by myself. I had great support from the other players. They had confidence in me to go out and make plays.”

When North Carolina had the ball with 3:39 left after pulling within seven points at 31-24, linebacker Keith Adams intercepted a pass by Ronald Curry and returned it to the 2. Two plays later, Travis Zachery scored from 2 yards out with 2:42 left.

Simmons finished 10 of 18 for 228 yards, while Gardner caught seven passes for a school-record 182 yards and three TDs, which matched a school mark. Dantzler carried eight times for 22 yards and was 4 of 7 for 68 yards before he was injured.

Curry, who sprained his right knee late in the second quarter but returned midway through the third quarter, was 18 of 34 for 314 yards and two interceptions.

“To set a Clemson record for touchdown passes in a big road game is a credit to him,” Bowden said of Simmons. “To come off the bench and play the way he did is something special.”

The Tigers, whose first eight opponents have a combined record of 19-37, have the toughest part of their schedule left in their bid for a perfect season and shot at the national title. Clemson plays Georgia Tech next week, followed by Florida State and South Carolina. The three teams have a combined 19-4 record.

Curry, who missed the final six games of the ’99 season with an injured Achilles’ tendon, led the Tar Heels to its surprising lead that hit 17-0 after he ran 6 yards for a score with 12:18 left in the second quarter.

After the Tigers cut the lead to 17-14, Curry was injured with 16 seconds left in the half as he threw an incomplete pass. He was sandwiched between a defender and one of his offensive lineman and was carried off the field by two strength coaches. Antwan Black came on and the Tar Heels couldn’t get anything going until Curry returned.

The Tigers tied it at 17 on Aaron Hunt’s 22-yard field goal with 10:41 left in the third quarter before taking the lead on Simmons’ 43-yard hookup with Gardner.

Clemson extended its lead to 31-17 with 13:12 left in the game on Simmons’ 25-yard TD pass to Gardner, who caught the ball with three defenders around him. North Carolina pulled to 31-24 on a 1-yard TD run by Anthony Saunders with 9:17 left.

Before Curry went out, he had the crowd of 55,000 at Kenan Stadium standing and cheering for an upset, just a few hours after 10,000 fans showed up at Dean Dome across the street to watch the annual Blue and White basketball scrimmage.

While Carolina’s defense was able to keep Dantzler from his patented quick bursts through the line for big gainers, Curry was unstoppable with his accurate passes and mad scrambles.

The Tar Heels took a 3-0 lead with 5:37 left in the first quarter on Jeff Reed’s 26-yard field. The points were set up when Curry hit Brandon Russell with a 31-yard pass to the 11.

Curry came right back and burned the Tigers again, this time on a 57-yard pass to Jamal Jones to set up Russell’s 2-yard touchdown dive that put the Tar Heels ahead 10-0 with 1:23 left in the quarter.