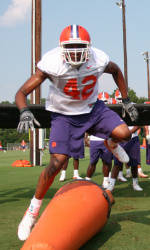 Clemson, SC – Clemson held its fourth straight day of a three-four workout on the practice fields behind the Jervey Athletic Center on Tuesday. The practice began in 98 degree heat, but Clemson Head Coach Tommy Bowden put the temperature in perspective for his squad.

“I just talked with a professor who spoke with the father of Brandon and Byron Clear (Clemson freshmen), who is stationed in Iraq,” said Bowden. “It is a 121 degrees over there and he is carrying 60 pounds of equipment. Not to mention dodging bullets. So if you begin to feel sorry for yourself because of the heat, think of what your teammate’s father is enduring.”

Mr. Clear went to Iraq three weeks ago and will miss his sons’ first year of football at Clemson. Both of his sons are doing well. Byron is a defensive end, while Brandon is a wide receiver.

Bowden said the team worked hard for its three-hour practice and he was pleased with the effort on Tuesday. “We had some good drills today. We had the number-one offense work against the number-one defense working on fundamentals.

“The freshmen continue to stand out to me. Jarvis Jenkins really competed today. DeAndre McDaniel continues to do well. He was a leader in terms of big hits during the spring and I can see he is going to pick up where he left off. I was also impressed with the performance of the all the tight ends today.”

Landon Walker was the only new player in a yellow jersey on Tuesday. He missed the practice with a knee injury and is slated for surgery on Thursday. The injury is not believed to be serious.

The Tigers will practice in full gear for the first time on Wednesday afternoon. The practice had been scheduled for the morning, but a further examination of the exam schedule forced coach Bowden to change the schedule. The team will practice from 3:15 Pm to 5:15 PM on Wednesday. Many of the players have exams in the morning and at night.

“We will only have them for two hours on Wednesday, but we will do some contact drills. We will get some things done. When you put the pads on that leaders come forward. We will also start to develop some toughness.”