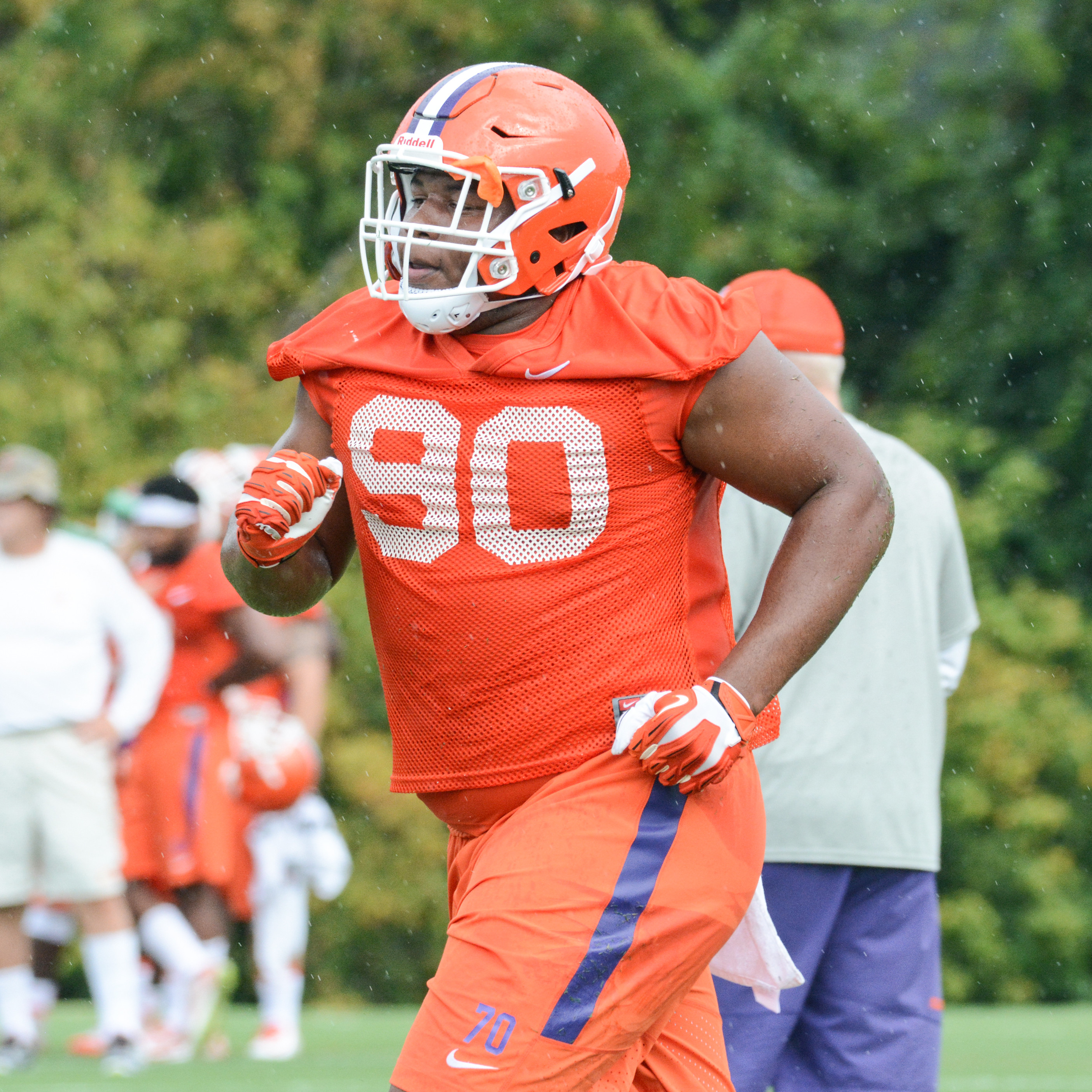 Clemson, S.C.—Clemson held a 21-period, two-and-a-half hour practice for the fourth straight day on Friday.  The team of over 100 players worked in shoulder pads, helmets and shorts in humid weather conditions.

Clemson Head Coach Dabo Swinney is anxious for Saturday’s evening practice as it will be the first day the team works in full pads. “We will take another step forward in the preparation process when we put the full pads on for the first time Saturday night,” said Swinney.

Overall, Clemson’s eighth-year head coach was pleased with the team’s effort, but there were some mistakes.  “It was a tough practice because 13 of the 21 periods we went good-on-good.  They competed and I have seen that in each practice so far. But we had way too many penalties. “

Swinney was asked if anyone had surprised him so far in practice and he did single out two players,  front seven defenders Xavier Kelly and Chris Register.  Kelly is a freshman  defensive end from Wichita, Kansas and Register is a red-shirt sophomore defensive end from Browns Summit, N.C.

“We knew Xavier would be where he needed to be physically when he got here in June, but you always wonder about the mental aspect because our defensive ends don’t just show up and put their hand on the ground.  It is a complicated system.    But, he has given us confirmation that he is ready for our system.

“The same for Chris Register.  He looks as good as he has looked physically since he got here and he has done well on his assignments.  He was one of the players we hoped would make strides and he has.  He had a great summer. “

Swinney has been intent on not letting his players get comfortable during practice.  At one point on Friday he stopped practice and called out players to compete one-on-one in front of the entire team.  Kelly went one-on-one in a pass blocking drill with Mitch Hyatt.  Freshman defensive back Trayvon Mullen went one-on-one defending Mike Williams.

“I want everyone to be ready for anything during practice,” said Swinney, who changed up substitution patterns during an 11-on-11 drill on Thursday.

Clemson will continue practice on Saturday night, then take Sunday off before having two practices on Monday.

Notes:  Five former Tigers are working as student assistant coaches this fall.  All are in school working to finish their degree requirements.  The list of student coaches includes returnees Terry Allen, Roscoe Crosby, Keith Jennings and Dymon Adams.   The only newcomer to the group of Bill Spiers, who was Clemson’s punter in 1986, but was a first-round draft choice in baseball after the 1987 season.  He went on to play 13 years in the MLB.  His son is on the Clemson roster as a punter….this is Fantasy Camp weekend and 44 “campers” are viewing the Clemson program up close this weekend.