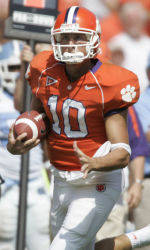 Clemson, SC – Cullen Harper completed 14-21 passes for 140 yards and James Davis rushed for 57 yards and scored a touchdown to pace the offense in a two-hour scrimmage in Clemson Memorial Stadium on Saturday morning. It was the second major scrimmage for Tommy Bowden’s football team, who will conclude Spring practice on April 14 with the Spring Game at 1:00 PM at Memorial Stadium.

While Harper and Davis stood out on offense, there were also many top defensive performances. Freshman DeAndre McDaniel had six tackles and three passes broken up, while sophomore cornerback Crezdon Butler had three tackles, a tackle for loss and an interception. Defensive End Kwam Williams had two tackles for loss, including a sack.

Bowden singled out the performance of a couple of players after Saturday’s practice. “I thought James Davis ran very hard today. Ray Ray McElrathbey also had another good day. We still would like to sign another running back before August, but the way he has come on as the third running back it does not appear to be as critical.

“On defense, DeAndre McDaniel in the secondary. He is an aggressive player. We don’t have to tell him to attack. He is a contact player who shows up in practice each day.”

Bowden was pleased with the play of the quarterbacks as well overall. “Cullen Harper has played well. He has the most experience so he knows the offense the best. He has paid attention to detail and that is good to see. But, the other quarterbacks have done well as well. They are making progress.”

The defense seemed to have the upper hand during the regular aspect of the scrimmage. The offense scored four touchdowns, but only one was on a drive of over 35 yards. Davis scored on a four-yard run to start the scoring on a 25-yard drive. Durrell Barry scored on a 39-yard pass and run from Harper, and Paul Macko and Ronald Watson, Jr. also scored on short runs. Red-shirt freshman Richard Jackson made a 44-yard field goal.

The offense seemed to have the upper hand in the goal line aspect of the scrimmage that concluded the day’s practice. The offense scored five touchdowns in nine possessions. McElrathbey scored two on goal line runs.

Harper had a solid day, completing 14-21 passes for 140 yards and a touchdown. He has now completed 27-42 passes for 310 yards, two touchdowns and no interceptions in the two stadium scrimmages. Willy Korn completed 8-17 for 80 yards, but had a touchdown pass dropped and another score that was wiped out when the officials called him down on a sack even though he was just tagged in the back by a defender. (Clemson coaches do not allow quarterbacks to be tackled during scrimmages, the policy for most Division I schools). Tribble Reese had 4-9 for 47 yards through the air.

Davis was the top rusher in the scrimmage with his 10-57 day. C.J. Spiller played sparingly before leaving after an hour to compete in Clemson’s track meet at the Rock Norman Track later in the afternoon. He had 7-7 rushing and one catch for five yards. Jacoby Ford had the same schedule and had two receptions for 21 yards before leaving for the track meet.

Ronald Watson, Jr. was the second leading rusher with 14-41 and a touchdown. McElrathbey had 8-28 on the ground, including the two touchdowns in the goal line portion of the scrimmage. He also had two receptions for 16 yards.

Sophomore tight end Michael Palmer had three receptions for 29 yards, Rendrick Taylor had 3-8 and a touchdown in the goal line portion of the scrimmage, and Tyler Grisham had 3-8 receiving. Aaron Kelly had the most receiving yards with 2-45, while Barry had the 39-yard score on his only reception. La’ Donte Harris had 2-23 through the air, while Jeff Ogren had 2-20.

Haydrian Lewis, Chris Chancellor and Elsmore Gabriel all had seven tackles to lead the defenders in that category. Gabriel also had a sack. McDaniel had six stops to go with three pass deflections from the secondary. Jamie Cumbie had five tackles, all first hits. Crezdon Butler had the interception by the defense, while Jock McKissic had the only fumble recovery. Williams had two tackles for loss, including a seven-yard sack. Ricky Sapp had just one tackle, but it was a sack, his fourth sack in two scrimmages.

Jamal Medlin was the only player who suffered an injury that require his removal from the practice. He suffered a knee injury, but Clemson doctors said after practice they don’t believe the injury is serious, just a sprain. Brandon Pilgrim missed the scrimmage with an arm injury and is out for the rest of the spring. Defensive tackle Dorell Scott sat out the scrimmage while he recovers from a concussion suffered in practice last week.