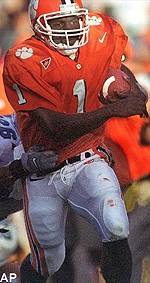 Clemson, SC – Clemson’s offense was back on track during a 101-play scrimmage in Death Valley on Tuesday night. The defense had dominated most of the two-a-day sessions, which came to a close on Tuesday. Classes start on Wednesday at Clemson and the return to the normal one-a-day practice routine.

The offense gained 698 yards on those 101 plays and many big plays were turned in. On the third possession, Willie Simmons hit Joe Don Reames on a 60-yard touchdown strike. Later, there were back to back possessions when quarterback Woodrow Dantzler hit Rod Gardner for a 90-yard touchdown pass, followed by a 73-yard run by Bernard Rambert. Simmons also turned in a 51-yard run.

Rambert had 5 rushes for 91 yards, while Chad Jasmin had 6-23 and scored three touchdowns during the goal line portion of the scrimmage. Reames finished with 3 catches for 58 yards, while Kevin Youngblood had 4-51. Gardner had the most yardage among the receivers with two catches for 102 yards.

“The offense showed improvement,” said Bowden. ” It is certainly apparent that our defense is not as effective with Keith, Robert and some others out of the lineup. We must develop depth on defense. Based on what we saw tonight there is too much separation between the first team and the second team.”

Another bright spot of the scrimmage was the kicking game. Freshman Aaron Hunt converted field goals from 47 and 46 yards in his two field goal attempts and he made all his extra points. Tony Lazzara was 2-2 on field goals, both from 27 yards. “I am staying with what I said at the beginning of practice, that Aaron is number-one, but Tony has really done well. It is a very close battle.”

The leading tacklers in the scrimmage were Rodney Feaster with six, Robert Carswell with five, Rodney Thomas with four and Keith Adams with four. Jason Holloman also had four stops, including two tackles for loss and a sack. Eric Meekins caught Bowden’s eye with a 54-yard interception return and some good coverage. Chad Speck also had four tackles and a touchdown saving interception. Marcus Lewis had a fumble recovery.