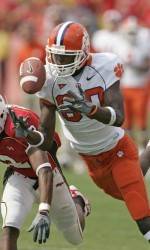 First-year freshman Jacoby Ford had four receptions for 103 yards and two touchdowns to highlight play in Clemson’s first spring scrimmage at Death Valley on Saturday morning. The Tigers are preparing for the April 8 Spring Game at Clemson Memorial Stadium. It was the fifth of 15 practices for the Tigers, who will practice twice next week before Clemson University has spring break.

Ford, had touchdown receptions for 53 and 15 yards. The 53-yard reception was a pass from Cullen Harper on a screen play and the 15-yard score came on a pass over the middle from Tribble Reese. Ford also had a 22-yard run during the day’s work.

All three quarterbacks were solid in their performance on Saturday. First-team signal caller Will Proctor was 14-25 for 154 yards and a touchdown. Harper was 10-16 for 144, while Reese was 6-10 for 75 yards. Reese’s day also included a 70-yard touchdown run against the third-team defense.

“I thought all three quarterbacks managed the offense well,” said Clemson Head Coach Tommy Bowden. “We had some penalties on offense, which you are going to have in your first scrimmage, but they performed well. I was disappointed in some mistakes we made in the red-zone and that is an area we are continuing to work on this spring. It is an area we need to improve.”

Demarick Chancellor was the top rusher among the running backs with 14-43. James Davis had 12-34 and a touchdown, while Reggie Merriweather had 10 carries for 32 and a touchdown. Clemson worked on short yardage situations for much of the second half of the scrimmage.

Aaron Kelly was the top receiver in terms of receptions with 6-49 and the aforementioned touchdown. Ford’s 103 yards led the pass catchers in terms of yardage, while Tyler Grisham had 3-38 and La’Donte Harris had 3-36 receiving. Andrew Diomande had 3-35 to complete the balanced performance by the receivers.

Overall, the offense scored six touchdowns, but just two against the first team defense, and just one of those on a drive over 25 yards. “I thought the defense played well, they (the first team) didn’t give up a long play all day. I thought the young defensive linemen continued to show improvement. They got some good work in this week.

“Overall, I am pleased with the first five practices. We haven’t had any injuries and that has allowed us to get a lot of work done. I am also seeing some good leadership.”

The defense contributed four sacks and two interceptions during the scrimmage. Michael Hamlin and Kavell Conner had interceptions off passes that were tipped. Phillip Merling, Antonio Clay, Brandon Cannon and Brian Baker all registered quarterback sacks.