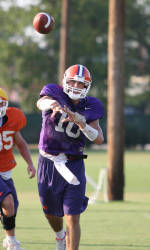 Clemson, SC – Quarterbacks Cullen Harper and Willy Korn combined to throw five touchdown passes, two in goal line situations, to highlight the play of the offense, and senior linebacker Tramaine Billie had three tackles for loss, including a sack, to highlight the defense in an 85-play Clemson football scrimmage at Memorial Stadium Saturday morning.

It was the first of three preseason stadium scrimmages planned for Tommy Bowden’s Tigers prior to the season opener against Florida State on September 3.

“We had a good workout, but we still have a lot to accomplish by the first game,” said Bowden, who is in his ninth season as Clemson head coach. “I wasn’t satisfied with the pace of the offense, getting the plays off in a timely manner. We still have some work to do.

“The quarterbacks played well. They made some good throws and some good reads. They got the offense in the end zone a couple of times. Defensively it seemed like we moved around well. They didn’t give up many big plays, but the offense was successful in goal line.

“Again, we saw some freshmen step up. Brandon Clear made a terrific catch (30 yards) along the sideline on a big third-down play. Miguel Chavis played well on defense. Chavis missed the practice with a hip flexor on Friday, then he was the top tackler today. That is impressive for a freshman.

“The highlight of the scrimmage might have been the kicking game. We had four live kickoffs and three of the four went to the end zone, and the fourth went to the one. We did a good job on the return man as well. And, we kicked in both directions, so it wasn’t that the wind was a factor. It makes a big difference when you can kick it to the end zone.”

Harper completed 8-11 passes for 80 yards and two scores in running the number-one offense. He completed his first five passes of the scrimmage. He threw a six-yard touchdown pass to Durrell Barry.

Willy Korn completed 7-13 passes for 91 yards and three touchdowns. He threw an interception on his first play of the scrimmage, a theft that was returned 14 yards by freshman safety DeAndre McDaniel. But, Korn settled down after that and completed a 37-yard touchdown pass to sophomore walk-on receiver Terrance Ashe, a 15-yard scoring pass to freshman tight end Brian Linthicum an a three-yard scoring pass to fullback Alex Pearson. Third-team quarterback Tribble Reese was 4-8 for 49 yards.

Five different running backs carried the ball at least six times on Saturday. Sadat Chambers was the leading rusher with 10 carries for 27 yards and two scores, both coming in goal line situations. Ray Ray McElrathbey had 6-25, including a six-yard scoring run. James Davis and C.J. Spiller did not see a lot of action. Davis had 6 for 15 rushing and Spiller had 6-17 and scored twice in the goal line portion of the scrimmage. Davis had a 35-yard touchdown reception called back by a penalty.

Ashe was the top receiver on the day with 4-59, including the 37-yard catch and run for a touchdown. Ford had three catches for 24 and a touchdown. Freshman Brandon Clear had 2-38, including a 30-yard reception from Reese that was the long play of the scrimmage.

The defense had many outstanding plays. McDaniel and Tramaine Billie was active with five tackles, including three for negative yardage. Nick Watkins and Jeremy Campbell were both active on defense with six tackles apiece.

Mark Buchholz, the first-team place kicker who is also a starting midfielder on the Clemson men’s soccer team, made field goals of 22 and 28 yards. He also had two kickoffs that went into the end zone. Richardson Jackson had two kickoffs, one that went two yards deep and another to the one-yard line. College football kicks off from the 30 yard line this year.

Defensive end Jamie Cumbie (shoulder) and reserve offensive tackle Byron Maxwell missed the scrimmage after suffering a head injury in practice on Friday. He should return next week.