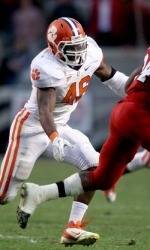 CLEMSON, SC – Sammy Watkins had 116 receiving yards on four receptions and the Clemson defense had a solid performance to highlight a 100-play scrimmage at Memorial Stadium on Monday. It was the first spring scrimmage for Dabo Swinney’s Tigers. The annual Spring Game will be held on Saturday, April 14 at 4:00 PM.

Watkins led the offense with his receiving performance that included two 50-yard receptions, one from Cole Stoudt and one from Morgan Roberts. Nuke Hopkins had three catches for 40 yards and Adam Humphries added 3-20 receiving and three rushes for 33 yards.

First-team quarterback Tajh Boyd completed 8-15 for 89 yards, while Stoudt was 8-13 for 85. Tony McNeal completed 6-9 for 48 yards, while Roberts was 1-3 for 50 and that touchdown to Watkins. The top rusher was D.J. Howard with 8-36. Andre Ellington had four rushes for 21 and Mike Bellamy had 6-15, including a three-yard touchdown. Rod McDowell had 9-26. Stoudt was actually the third leading rusher with 5-32, including a five-yard touchdown run.

B.J. Goodson, had interceptions and defensive tackle DeShawn Williams had a fumble recovery.

“This was one of the better first scrimmages I can remember,” said Swinney. “I was pleased with the performance of the defense. I thought they might be behind for this first scrimmage, but they did a good job. Offensively we saw Ellington, Watkins, Hopkins and Boyd make some plays, which is what you would expect. The special teams were good with Catman hitting 4-4 on field goals and the punting was good.

“We did have a few snap issues and we did put it on the ground a couple of times. We got a lot of good work on both sides of the ball. It was fast pace and a good tempo.

“The linebackers were the top tacklers today and they did a good job. Tig Willard had and outstanding day. Lateek Townsend has made great strides as well.”