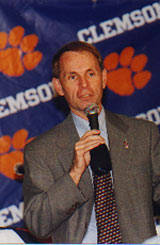 For the rest of the season, backpacks, tote bags and other carryalls will not be allowed in the stadium. In fact, fans are discouraged from even bringing purses because any bag, including diaper bags, will be subject to search.

Once inside the football stadium, fans will not be allowed to exit and return. The change in the policy allowing “pass-outs” is initially for this Saturday only but may be extended.

Bomb squad experts and bomb-sniffing dogs from the city of Anderson will be on hand to check the stadium and cars parked near it.

Everyone attending the game should have an official form of photo identification with them at all times.

Planes will be restricted from flying over the stadium, and there will be no through traffic on roads during the game.