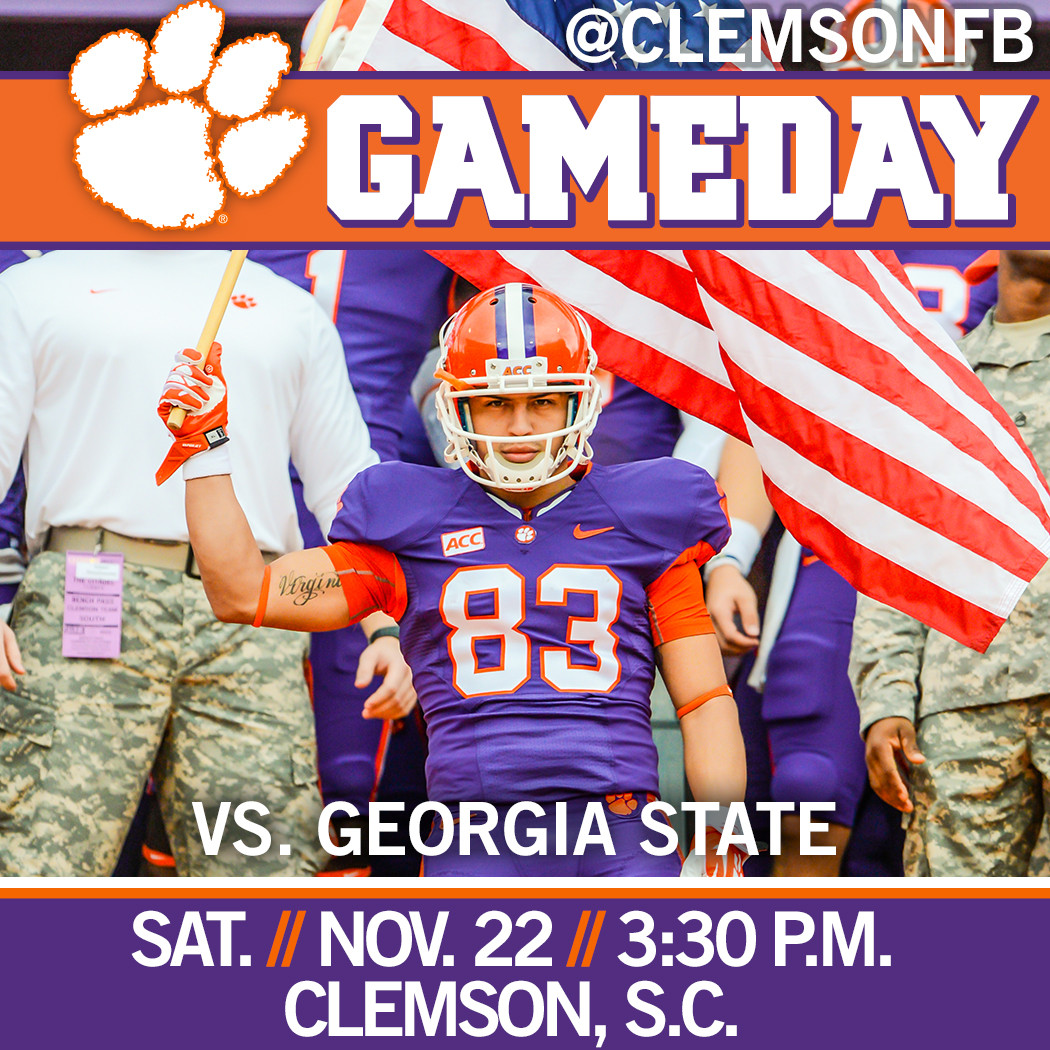 New for 2014, Clemson now has a GPS map that can show you the nearest portable or permanent restroom to your location! To enable the GPS function, click HERE, add “Gameday Restrooms” as a layer on the top right menu and then click on the nearest restroom and directions will pull open to show you how to get there!

To see the map of restroom locations, click HERE.

The Clemson Athletic Department and IPTAY are looking forward to hosting Georgia State this Saturday in Memorial Stadium for Military Appreciation Day. Clemson Athletics encourages all Tiger fans to arrive to the stadium early to watch, “The most exciting 25 seconds in college football,” as the Tigers run down the Hill. Gates open at 1:30 p.m., so be sure to be in your seats and be loud!

This week, The Greenville Health System Tiger Tailgate Show begins at 12:30 p.m. on the lawn of Littlejohn Coliseum, featuring a pregame radio show with tons of giveaways and inflatables for everyone to enjoy!

Beginning at 2 p.m., Tiger Band hosts its “90 Minutes Before Kickoff” mini-concert at the Outdoor Theater (between Sikes Hall and Cooper Library). At the conclusion, the band begins its traditional march down Fort Hill Street and makes its way to the West Endzone of Memorial Stadium.

We encourage everyone to arrive early and proceed to Lot 5 to welcome the team, as Tiger Walk is scheduled for 1:20 p.m.

We all know about the football game. Want to know what other must-see entertainment is happening inside Death Valley on Saturday? Click HERE to see a list of in-game ceremonies and presentations that are worthy of staying in your seat!

A unique part of the gameday experience at Memorial Stadium is “pass outs,” and the ability to leave the stadium during halftime and return. We encourage any fans utilizing this courtesy to be back in their seats as halftime ends to cheer on the Tigers in the second half! Thanks for coming to the games and being #ClemsonLOUD for all 60 minutes.

In an effort to continue to enhance the security of fans attending Clemson football games in Memorial Stadium, the Clemson University Police Department, the Clemson Athletic Department and IPTAY have announced updates from previous policies. All fans with searchable items such as purses, diaper bags, medically necessary items, binocular cases and seat cushions will be directed to screening areas at Memorial Stadium Gates 1, 5, 9, 11, 13, 16 and 20, where items are searched by designated and easily-recognized Memorial Stadium event staff. For the most efficient, effective and quickest entry into Memorial Stadium, officials recommend that fans arrive at least 90 minutes before kickoff. Additional information on the security policy is located HERE.

If you need assistance in getting to the stadium, look for the pickup locations designated by the tall white poles with the blue stripe.  To see a full list of ADA pickup locations, click HERE.

OTHER ATHLETIC EVENTS THIS WEEKEND IN CLEMSON

We have a great opportunity to showcase our spirit and enthusiasm to Georgia State fans this weekend for Military Appreciation Day. We encourage every Tiger fan to wear purple!

Saturday we celebrate Military Appreciation Day in Memorial Stadium. The theme of this year’s event is a salute to the 50th Anniversary of the Vietnam War. Throughout the game there will be tributes to those who have served in Vietnam.

The pregame show includes Tiger Band with its patriotic set. At the conclusion of the National Anthem, there will be a flyover by Post World War II Warbird planes. Keep an eye to the sky following the Clemson Alma Mater, as two members of the Special Forces Association Parachute Team from Fort Bragg, N.C. enter the stadium.

Ingame military recognitions include the introduction of Military VIPs, Hero-of-the-Game, Vietnam POWs, Wounded Warriors, Honor Flight and a tribute to Saturday’s “Purple Out.”

Prior to halftime, an announcement will be made for all Vietnam veterans to make their way down to the field. During halftime, Tiger Band will play the Armed Forces Medley, and all veterans and active-duty military members are asked to stand to be recognized when their branch’s song is played. Vietnam veterans will be recognized in the West endzone by branch during this time as well.

Families of fallen soldiers will also be introduced at halftime. A 21-gun salute will follow along with the playing of “Taps.”

For more information on all presentations and detailed bios, visit ClemsonTigers.com/Military14.

The Clemson University Athletic Department thanks all members of the military, veterans and families of fallen soldiers for their commitment and sacrifice.