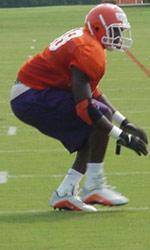 Clemson, SC – Clemson Head Coach Tommy Bowden welcomed 19 first year players to their first Tiger football practice on Tuesday. The Tigers worked out twice on Tuesday on the practice fields behind the Jervey Athletic Center, from 10:00 AM to 11:30 AM in the first session and from 4:45 PM to 6:15 PM in the afternoon.

Three of the 22 scholarship first-year players were missing as practice began. Those players include freshman wide receiver Tymere Zimmerman of Bennettsville, SC, freshman linebacker Donnell Clark of Griffin, GA and freshman running back Duane Coleman of Naples, FL. All will come to Clemson once they are cleared by the NCAA Clearinghouse.

One player who received word that he had been cleared on Monday night was freshman wide receiver Kelvin Grant. He reported to practice on Tuesday morning. Grant was a SuperPrep and USA Today All-American last year at Camden High School where he caught 59 passes for 1184 yards and 13 touchdowns.

Three of the 19 players who started practice are junior college transfers. Two of the three, Brandon Jamison and Kelvin Morris, have three years to play two, but Bowden announced that Vontrell Jamison, a 6-8 defensive end from Holly Hill, SC, had three years to play three. Morris began practice at the rover position, a position in John Lovett’s defense that calls on a player to help as a pass rusher and defender.

“We need to find a place for Vontrell Jamison to play right now,” said Bowden. “We would be wasting a year to red-shirt him, so we need to find somewhere for him to play. We won’t work him any harder than anyone else, but it will be important to find the right position for him early in the preseason. We need to get him on the field.” Bowden said Jamison was in good physical shape and had the second best 225 bench press reps on the team.

Bowden was happy with the physical condition and the attitude of his first-year players. “We worked a lot on technique, assignments that type of thing. They have four shots (practices) to get that down before the varsity joins them for practice on Friday. If they can accomplish that they will have made progress.

“We worked a lot on where to lineup, drills, that sort of thing. In the morning we also worked on special teams. Everyone tried out as a return person, snapper, some place they could help on special teams.”

Bowden said one of his main messages on Tuesday was patience. “It is a big adjustment coming from high school to college. These players put a lot of pressure on themselves. I try to tell them to be patient.

“Just look at Rod Gardner. He didn’t have many catches his first two years after red-shirting as a freshman. He changed positions three times before he settled at wide receiver. In five years he had a degree, was an All-American and a first round draft choice. He had to be patient, but it certainly paid off for him.”

Clemson’s freshmen will continue their work with two practices on Wednesday. The two practices are open to the public. The full squad will practice for the first time on Friday morning. Those practices will be closed.

Fan Appreciation Day on Sunday Clemson, Sc-Clemson will hold its annual Fan Appreciation Day at Death Valley this Sunday from 3:00 PM to 5:00 PM. All Clemson players and coaches will be available for autographs and to pose for photos under the South Stands at Death Valley. The function will not be held in Littlejohn Coliseum due to the renovation projects at that facility. Admission is free of charge. Clemson posters also will be available. Game tickets and the Clemson Media Guide also may be purchased on Sunday.

Tickets Available Clemson, SC-A reminder to all fans that season football tickets, single game football tickets (with the exception of the USC game) and group football tickets still remain for the 2002 campaign. Tickets can be purchased by calling 1-800-CLEMSON or by ordering them on-line at clemsontigers.com.